SumbandilaSat: From Sub To Space 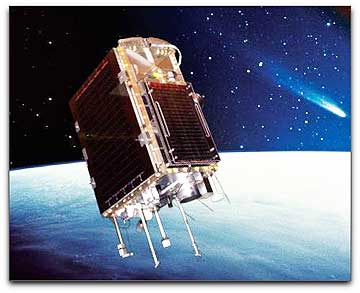 If all goes well, the R26 million Sumbandila satellite (SumbandilaSat) will take to the heavens from Severemosk in Russia. Sumbandila is Venda for "lead the way". The satellite will be launched after midnight from a Russian nuclear-powered missile submarine in the icy Barents Sea as part of a Russian navy exercise. The 18,200 ton Delta Class 4 sub, which is as long as one-and-a-half football pitches, will use a modified Shtil 2.1 intercontinental ballistic missile as a launch vehicle to place the satellite into an orbit 500km above earth. The satellite, with a three year lifespan, will be controlled from an operations centre outside Pretoria.

SumbandilaSat will give South Africa more access to space technology and strengthen its role in space initiatives. These include the SA Environmental Observations Network and the African Resource and Environmental Constellation Programme. The 81kg microsatellite will generate satellite imagery at a resolution equivalent to 6.25 metres above the ground. It will send the images to the ground tracking station at the Hartebeeshoek satellite application centre in Pretoria and a back-up station at the Overberg test range near Arniston. This is an earth observation satellite and its main payload is a remote sensing camera.