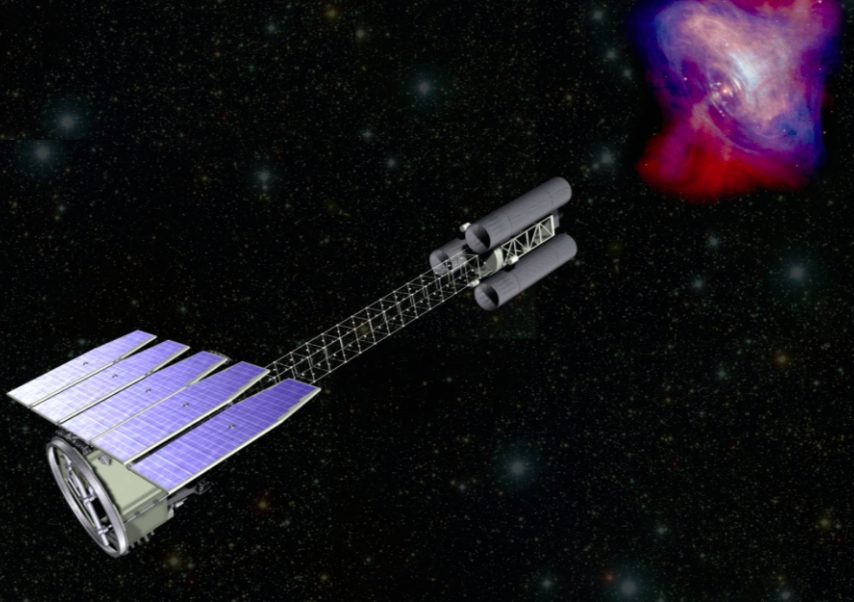 NASA announces a new science mission that will enable astronomers to view places they've never gone before. For the first time, the hidden details of some of the most extreme and exotic astronomical objects, such as stellar and supermassive black holes and neutron stars will be studied through the Imaging X-ray Polarimetry Explorer (IXPE) mission.

The mission will fly three space telescopes with cameras capable of measuring the polarization of these cosmic X-rays, allowing scientists to answer fundamental questions about these turbulent and extreme environments where gravitational, electric and magnetic fields are at their limits.

Objects such as black holes can heat surrounding gases to more than a million degrees. The high-energy X-ray radiation from this gas can be polarized—vibrating in a particular direction.

“We cannot directly image what’s going on near objects like black holes and neutron stars, but studying the polarization of X-rays emitted from their surrounding environments reveals the physics of these enigmatic objects,” said Paul Hertz, astrophysics division director for the Science Mission Directorate at NASA Headquarters in Washington. “NASA has a great history of launching observatories in the Astrophysics Explorers Program with new and unique observational capabilities. IXPE will open a new window on the universe for astronomers to peer through. Today, we can only guess what we will find.”

The mission, slated for launch in 2020, will cost $188 million. This figure includes the cost of the launch vehicle and post-launch operations and data analysis. Principal Investigator Martin Weisskopf of NASA’s Marshall Space Flight Center in Huntsville, Alabama, will lead the mission. Ball Aerospace in Broomfield, Colorado, will provide the spacecraft and mission integration. The Italian Space Agency will contribute the polarization sensitive X-ray detectors, which were developed in Italy.

NASA's Explorers Program provides frequent, low-cost access to space using principal investigator-led space science investigations relevant to the agency’s astrophysics and heliophysics programs. The program has launched more than 90 missions, including Explorer 1 in 1958, which discovered the Van Allen radiation belts around the Earth, and the Cosmic Background Explorer mission, which led to a Nobel Prize. NASA's Goddard Space Flight Center in Greenbelt, Maryland, manages the Explorers Program for the agency's Science Mission Directorate.