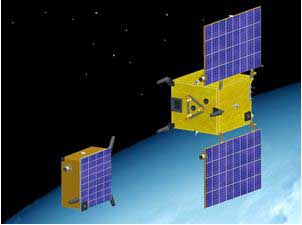 [SatNews] Information from the Swedish Space Corporation relayed that the Swedish Prisma satellites have been successfully launched aboard a Dnepr launcher from Yasny, Russia, today at 14.42 UTC. Sixteen minutes after launch, the two Prisma satellites were released, clamped together in launch configuration.

The mission control center of the Swedish Space Corporation had its first contact with Prisma at 16.14 UTC. The operations team could verify that the solar array panels had been deployed as planned and that the satellites are in a nominal state. During the coming days, all subsystems on both satellites will be successively verified, leading up to the planned separation of the satellites – Mango and Tango – on 3 August.

Prisma will demonstrate break-through technologies for autonomous formation flying and rendezvous. The mission comprises the verification of innovative systems for guidance, navigation and control, software and sensors as well as two propulsion systems. The series of experiments will commence after the separation in August and continue for ten months.

The Swedish Space Corporation (SSC) is the prime contractor for Prisma and has developed the major part of the onboard technologies and navigation experiments as well as the mission control software. The German Aerospace Center DLR, the French space agency CNES and the Danish University of Technology have contributed with navigation experiments, software and sensors.

The environmentally benign propulsion system and the micropropulsion system demonstrated onboard are developed by the SSC companies ECAPS and NanoSpace and make their first spaceflight on Prisma.

The Swedish National Space Board is the initiator of the Prisma mission and finances the project with support from the space agencies of France and Germany.

“Prisma is an excellent platform for the Swedish space industry to qualify its inventions in space”, says Olle Norberg, Director General of the Swedish National Space Board. “The mission will fortify Sweden’s position as a prominent technology nation and hopefully open doors to new international space projects where we can contribute.”

“SSC is a renowned player in the international space business”, says Lars Persson, CEO of the Swedish Space Corporation. “We really look forward to once again proving our capabilities in satellite development and control, and to the verification of our unique innovations such as the propulsion systems, which we expect to be very prosperous on the international market. We also appreciate the very rewarding cooperation we have with our European partners in this project.”

Technologies for autonomous formation flying and rendezvous are required in scientific missions where two or more spacecraft need to interact to form powerful antennas and telescopes. These innovations are also essential in missions that involve docking and inspections of satellites in orbit.