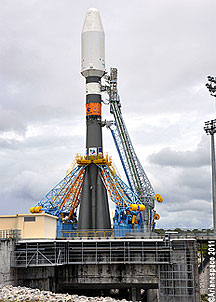 Soyuz is suspended over the Spaceport’s concrete launch pad by four support arms, and is connected to a pair of umbilical masts. Photo courtesy of Arianespace.
[SatNews] The keys have now been turned over to Arianespace by the ESA...

A ceremony was held on Saturday, May 7th, at the Soyuz launch complex (ELS) at the Guiana Space Center (CSG) in French Guiana, as Jean-Yves Le Gall, Chairman and CEO of Arianespace, received the "keys" to the launch complex from Jean-Jacques Dordain, Director-General of the European Space Agency (ESA). Also attending the ceremony were Yannick d'Escatha, President of French space agency CNES, and Vladimir Popovkin, head of Russian space agency Roscosmos. This major milestone was the culmination of the operational qualification procedure over the last few days. A Soyuz launcher was transported horizontally to the Launch Zone, then erected, with the upper composite being raised and mated to the lower three stages on April 30.

Two simulated launch countdowns were carried out, validating ELS facilities with the launcher present. Both facilities and personnel are now ready for the first launch campaign. Slated for this coming October, the first Soyuz at CSG will launch, on behalf of ESA, the first two satellites in the Galileo satellite positioning system. Operated alongside the Ariane 5 heavy launcher and Vega light launcher at the Guiana Space Center, Soyuz will round out ESA's family of launch vehicles, operated by Arianespace, which can now offer launch solutions for all types of missions. After the handover ceremony, Jean-Yves Le Gall said, "This is a great day for Europe, Russia and Arianespace. I would like to express my thanks to ESA, CNES and Roscosmos for their remarkable work. Soyuz at the Guiana Space Center gives us an extraordinary tool, enabling Arianespace, more than ever, to meet the full range of requirements for all of our customers."