NASA..No Harm Done When This IRIS Looks At The Sun (Launch)

[SatNews] "For the first time we will have the necessary observations for understanding how energy is delivered to the million-degree outer solar corona and how the base of the solar wind is driven." 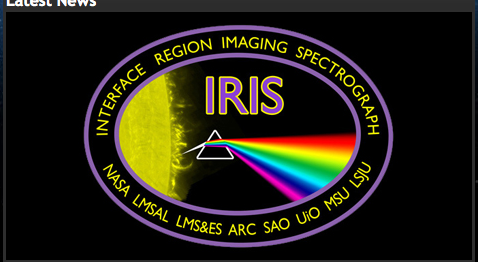 NASA's next scientific satellite, which is scheduled for launch June 26, will provide the most detailed look ever at the sun's lower atmosphere or interface region.

The Interface Region Imaging Spectrograph (IRIS) mission will observe how solar material moves, gathers energy, and heats up as it travels through this largely unexplored region of the solar atmosphere. The interface region, located between the sun's visible surface and upper atmosphere, is where most of the sun's ultraviolet emission is generated. These emissions impact the near-Earth space environment and Earth's climate.

The IRIS spacecraft was designed and built by Lockheed Martin's Advanced Technology Center in Palo Alto, Calif. It will launch aboard a Pegasus XL rocket deployed by an Orbital Sciences L-1011 aircraft from Vandenberg Air Force Base on the central California coast. 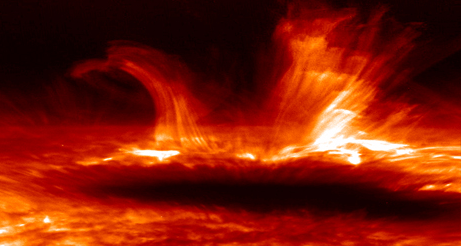 Understanding how energy travels through the lowest layers of the sun's atmosphere is the goal of NASA's Interface Region Imaging Spectrograph ...

"IRIS data will fill a crucial gap in our understanding of the solar interface region upon joining our fleet of heliophysics spacecraft," said Jeffrey Newmark, NASA's IRIS program scientist in Washington. "For the first time we will have the necessary observations for understanding how energy is delivered to the million-degree outer solar corona and how the base of the solar wind is driven."

"Previous observations suggest there are structures in this region of the solar atmosphere 100 to 150 miles wide, but 100,000 miles long," said Alan Title, IRIS principal investigator at Lockheed Martin. "Imagine giant jets like huge fountains that have a footprint the size of Los Angeles and are long enough and fast enough to circle Earth in 20 seconds. IRIS will provide our first high-resolution views of these structures along with information about their velocity, temperature and density."

After launch, IRIS will travel in a polar, sun-synchronous orbit around Earth, crossing nearly directly over the poles in such a way that it moves over the equator at the same local time each day. The spacecraft will orbit at an altitude range of 390 miles to 420 miles. This orbit allows for almost continuous solar observations on IRIS' two-year mission.

IRIS is a NASA Small Explorer Mission, which the agency's Goddard Space Flight Center in Greenbelt, Md., manages for the Science Mission Directorate in Washington. The goal of the Explorers Program is to provide frequent flight opportunities for world-class scientific investigations from space utilizing innovative, streamlined and efficient management approaches within the heliophysics and astrophysics science areas.

Other IRIS contributors include the Smithsonian Astrophysical Observatory in Cambridge, Mass.; Montana State University in Bozeman, Mont.; Stanford University in Stanford, Calif.; and the University of Oslo in Norway.

For more information about the IRIS mission visit.