EUMETSAT and the Japan Aerospace Exploration Agency (JAXA) have signed an agreement which will result in the agencies working closely together to monitor greenhouse gases in the Earth’s atmosphere.

Japan’s Greenhouse Gases Observing Satellite (GOSAT) was the world’s first satellite mission specifically designed for monitoring greenhouse gases. Instruments on the low-Earth-orbiting satellite measure carbon dioxide and methane for a decade. GOSAT-2 was launched in October as the successor to GOSAT. 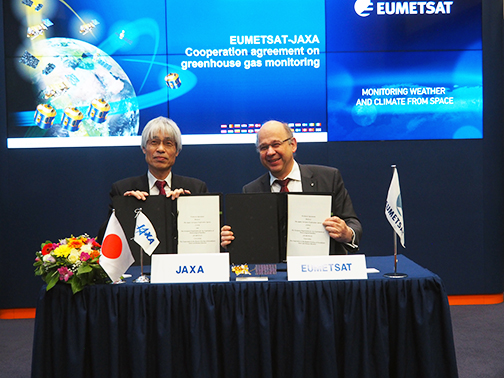 Mr Kazuo Tachi, on behalf of the Director General of JAXA’s Space Technology Directorate and EUMETSAT Director-General Alain Ratier signed the agreement at a ceremony at EUMETSAT’s Darmstadt headquarters.

Under this agreement, GOSAT and GOSAT-2 measurements will be calibrated against measurements taken by the Infrared Atmospheric Sounding Interferometer (IASI) on EUMETSAT’s three Metop satellites.  EUMETSAT will make the data from a series of GOSAT satellites operationally available to its users, the EU’s Copernicus Atmosphere Monitoring Service (CAMS), in particular.

Mr. Kazuo Tachi, on behalf of the Director General of JAXA’s Space Technology Directorate, said this cooperation with EUMETSAT is crucial to promote the satellite data to support improving national greenhouse gases inventories reports as well as precise understanding of the status of global greenhouse gases. JAXA also would like to enhance GOSAT and GOSAT-2 data use in weather forecasting operations through cooperation with EUMETSAT.