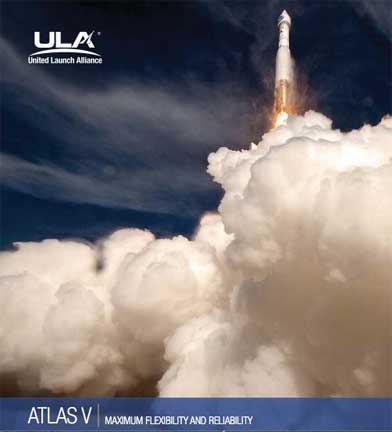 [SatNews] As a performance milestone is completed their launch vehicle is now one step closer to transporting humans.

United Launch Alliance (ULA) today announced the completion of a key milestone that could lead toward the certification of the Atlas V launch vehicle for human spaceflight.

To successfully complete the DER, NASA human spaceflight experts and ULA engineers worked over a span of several months to perform a detailed review of all NASA requirements and processes, and identified the extent to which the Atlas V meets those requirements.  Because Atlas V is already certified to fly the nation’s most complex exploration and national security missions, the need for any lengthy and inherently risky launch vehicle development program is expected to be avoided.

ULA has a great amount of detailed system and sub-system qualification, certification and flight data from 27 successful missions, which when taken together formed the basis of the DER, according to George Sowers, vice president of business development and advanced programs. “The Design Equivalency Review allowed the NASA team to compare their stringent human spaceflight requirements against the Atlas V design and demonstrated performance,” Sowers said.  “The ULA team benefited greatly from NASA’s insight and expertise. The completion of the DER is one more step towards confirming that Atlas V is the best choice for providing near-term, safe and affordable launch services for NASA human spaceflight.”

As NASA moves forward into the first phase of the Commercial Crew Integrated Design Contract (CCIDC), ULA will offer human-certified Atlas launch services to meet the needs for the crew transportation system providers.

For more information on ULA, visit the ULA Web site at.