Weather report for Thursday's launch looks good so far, but then Florida's weather this time of year can come with surprises. 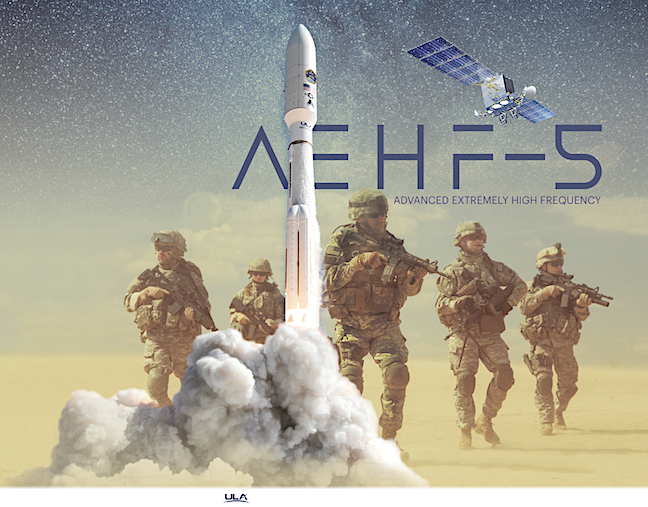 Producing more than two and a half million pounds of thrust at liftoff, the Atlas V 551 configuration rocket is the most powerful in the Atlas V fleet. The 551 rocket has launched groundbreaking missions for our nation—from the critically important MUOS constellation to historic science missions including New Horizons, the first mission to Pluto and the Juno mission to Jupiter. The Atlas V 551 configuration first launched on January 19, 2006 and has launched nine times to date.

“Our highest priority is to safely and reliably deliver national assets,” said Gary Wentz, ULA vice president of Government and Commercial Programs. “We are proud to have successfully launched the first four AEHF satellites, and look forward to launching the newest addition to the constellation in support of our nation’s national defense and the warfighter community.”

This mission will launch aboard an Atlas V 551 configuration vehicle, which includes a 5-meter large Payload Fairing (PLF) and stands at 197 ft. tall. The Atlas booster for this mission is powered by the RD AMROSS RD-180 engine. Aerojet Rocketdyne provided the five AJ-60A solid rocket boosters (SRBs) and RL10C-1 engine for the Centaur upper stage.

To date, ULA has a track record of 100 percent mission success with 133 successful launches.

With more than a century of combined heritage, United Launch Alliance is the nation’s most experienced and reliable launch service provider. ULA has successfully delivered more than 130 satellites to orbit that aid meteorologists in tracking severe weather, unlock the mysteries of our solar system, provide critical capabilities for troops in the field and enable personal device-based GPS navigation.