[SatNews] Arianespace remains on track for a record number of launches at the Spaceport in 2015, as underscored by the busy week of preparations for Ariane 5's next heavy-lift mission, which were performed in parallel to the recent and successful flight of the company's medium-lift Soyuz from French Guiana. 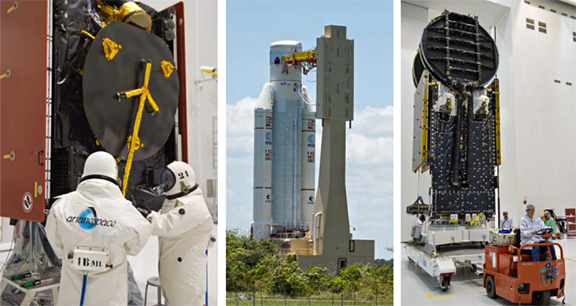 This week’s launch preparations at the Spaceport for Ariane 5’s Flight VA226 included fueling of ARSAT-2 in the S5 payload preparation center (at left), transfer of the heavy-lift launcher to the Final Assembly Building (center), and the continuing check-out of Sky Muster in the S5 facility (photo at right).

The upcoming Ariane 5 launch is scheduled for September 30 to orbit a pair of telecommunications satellites: Sky Muster for Australian operator nbn and ARSAT-2 for Argentina's ARSAT. During activity of the past several days, Flight VA226's Ariane 5 was transferred from the Spaceport's Launcher Integration Building (where it was integrated by prime contractor Airbus Safran Launchers) to the Final Assembly Building for installation of Sky Muster and ARSAT-2 under Arianespace responsibility.

Sky Muster is a high-performance broadband satellite, and will be riding in the upper passenger position of Ariane 5's dual-payload arrangement. This SSL-built (Space Systems Loral) relay platform will weigh in at nearly 6,400 kg. and is the first of two satellites for nbn that will help deliver high-speed broadband service to more than 200,000 homes and businesses around Australia,- including many in rural and remote areas that do not have access to quality broadband connections.

ARSAT-2 is the second of three geostationary satellites that will increase Argentina's telecommunications capacity and guarantee the same level of connectivity quality across the country's regions.  Arianespace successfully orbited the first of these relay platforms, ARSAT-1, on Ariane 5 Flight VA220 in October 2014. The ARSAT series of spacecraft is produced by Argentina's INVAP, with Airbus Defence and Space and Thales Alenia Space serving as leading equipment suppliers.  The satellites' operation is under the responsibility of ARSAT, which has a strategic role in implementing governmental policies in Argentinian telecommunications, broadcasting and Internet—as well as to increase broadcasting, telecommunications and satellite-based services for commercial, public, private and government-run applications.

Arianespace's 2015 target: 12 missions with its launcher family
Flight VA226 with Sky Muster and ARSAT-2 will be the ninth of 12 Arianespace missions targeted during 2015.  Such a sustained cadence is possible because of a robust launcher family—composed of Ariane 5, Soyuz and the lightweight Vega—along with the Spaceport's capability to have multiple missions being prepared in parallel.