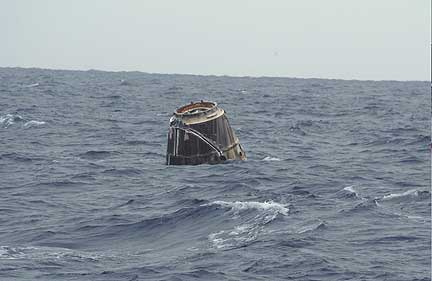 The first picture of the Dragon spacecraft as it floats in the ocean awaiting recovery ships.

[SatNews] Even on the autobahn, or in the Indy 500 vehicles don't travel at this speed...

The Dragon has (splash landed) today, after successfully completing an historic mission to the Space Station. This morning, at approximately 8:42 AM Pacific/11:42 AM Eastern, Space Exploration Technologies (SpaceX) completed its historic mission when the Dragon spacecraft splashed down safely in the Pacific.  The vehicle will now be recovered by boats and start the trip back to land.

Last week, SpaceX made history when its Dragon spacecraft became the first commercial vehicle in history to successfully attach to the International Space Station.  Previously only four governments— the United States, Russia, Japan and the European Space Agency—had achieved this challenging technical feat.  Dragon departed the space station this morning. 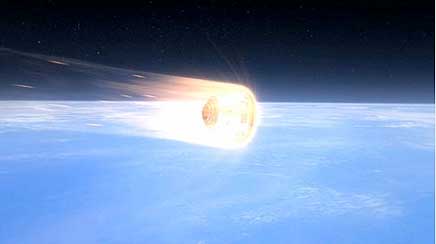 Dragon splashed down successfully on May 31, 2012 at 11:42 a.m. EDT in the Pacific Ocean off the west coast of California. In a carefully timed sequence of events, dual drogue parachutes deployed at 45,000 feet to stabilize and slow the spacecraft. Full deployment of the drogues triggers the release of the main parachutes, each 116 feet in diameter, at about 10,000 feet, with the drogues detaching from the spacecraft. Main parachutes further slow the spacecraft's descent to approximately 16 to 18 feet per second.

This is SpaceX's second demonstration flight under a 2006 Commercial Orbital Transportation Services (COTS) agreement with NASA to develop the capability to carry cargo to and from the International Space Station.

The Positive Results Of This Successful Mission...