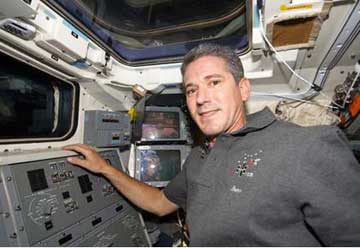 No doubt it was a bittersweet experience earlier today as the STS-125 crew bid a final farewell to the Hubble Space Telescope. With servicing completed, the telescope was released from the shuttle’s robotic arm at 8:57 a.m. EDT. Hubble — considered better than new following five days of repairs and upgrades — will never be seen up close by humans again. This was NASA's last service call. "Hubble has been released," reported commander Scott Altman. "It's safely back on its journey of exploration as we begin steps to conclude ours. Looking back on this mission, it's been an incredible journey for us as well."

Image right: Astronaut Michael Good, STS-125 mission specialist, pauses near controls on the aft flight deck of the Earth-orbiting Atlantis on the day the space shuttle,parts company with the Hubble Space Telescope for the final time. Photo Credit: NASA

The shuttle and telescope had just crossed the Atlantic, and were soaring 350 miles above the coast of northwestern Africa, when astronaut Megan McArthur used a robot arm to release the snares gripping Hubble. Then the shuttle slowly backed away.

Mission Control radioed congratulations: "It's wonderful to see Hubble, the most famous scientific instrument of all time, newly upgraded and ready for action thanks to you."

With Hubble flying on its own again, the seven astronauts looked ahead to Friday's planned landing. But first they had to inspect their ship one last time to make sure it had not suffered any serious damage from space junk. The wing and nose survey, similar to one performed last week to check for launch damage, got under way early Tuesday afternoon.

The telescope's unusually high orbit had placed the shuttle and its crew at increased risk and, because of the lack of a refuge, prompted NASA to keep a rescue ship on standby until the end of the 11-day flight. To improve their safety, the astronauts dropped Atlantis into an egg-shaped orbit that is, much of the time, lower than the telescope's junk-ridden orbit.

During five consecutive days of spacewalks loaded with drama, Atlantis' crew labored tirelessly on the 19-year-old observatory. Four men working in teams of two gave the telescope two new high-powered science instruments and a suite of other up-to-date equipment, and fixed two broken instruments, something never before attempted in orbit.

The astronauts persevered, despite stuck bolts, ill-fitting gyroscopes and flyaway shreds of insulation. Two of them were ready to jump into spacewalking action one last time if the telescope's aperture door had not opened Tuesday morning or some other last-minute problem cropped up. None did.

NASA said the astronauts' extraordinary effort not only fixed Hubble, but should give the iconic telescope another five to 10 years and allow it to reveal even more mysteries of the cosmos.

"This morning, you watch us from the pinnacle of human existence, representing the pinnacle of our craft, and leaving Hubble at the apex of its scientific power," Hubble program officials said in a message to the crew. "Hubble is now ready to resume its role as humankind's most powerful eyes on the universe."

The Hubble team hopes to resume celestial observations by the end of summer, following an intensive series of tests. As for the space telescope's future, there will be no more visits. Sometime after 2020, NASA will send a robotic craft to steer it back into the atmosphere and a watery grave. The spacewalkers installed a docking ring for just that purpose.

That day, however, was far from the astronauts' minds as they reflected on their success.

"It's a little bittersweet that it's over," telescope repairman Michael Massimino said late Monday after the final spacewalk.