Link to homepage
[SatNews] On December 5th, a Russian Federal mission of a Proton M Block DM-03 vehicle was launched with three GLONASS-M navigation satellites from the Baikonur Cosmodrome in Kazakhstan and a mission failure resulted. 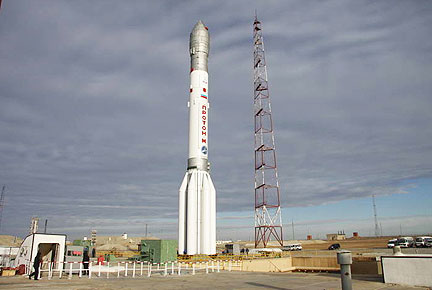 Proton M Block DM-03 launch vehicle
A Russian State Commission was established on December 5th to determine the cause of the failure and to establish corrective actions. An interim report is expected in approximately one week that may include details on the respective performance of the Block DM-03 upper stage built and operated by RSC Energia (Energia) and the three lower Proton M stages, all built and operated by Khrunichev Research and State Production Center (Khrunichev), the majority owner of ILS. While the Proton M is a flight-proven configuration, this was a maiden flight of the Block DM-03 upper stage, which is a derivative of Energia’s Block DM-3. Further information will be provided on the status of the December 5 Proton M Block DM-03 GLONASS-M mission investigation as soon as it becomes available.
The KA-SAT satellite built by Astrium for Eutelsat is scheduled for launch on December 20th at 03:47 (Baikonur) using the Proton M Breeze M launch vehicle. The Breeze M upper stage, like the Proton M stages, is built and operated by Khrunichev. The KA-SAT satellite launch campaign continued with the completion of the spacecraft propellant loading yesterday, and the start of joint operations today with mating to the payload adapter system.
Topical Tags :
Manufacturing
Agencies
Regulatory/Government
Launch
Satellite Operator
Regional Tags :
Europe
North America