[SatNews] The first geostationary satellite built in Argentina—ARSAT-1—has been delivered to French Guiana, where this milestone spacecraft will be readied for Arianespace’s dual-passenger Ariane 5 mission in mid-October. 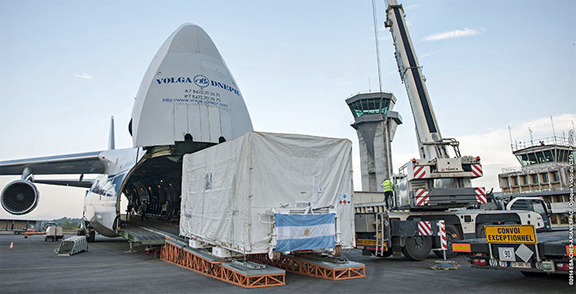 The shipping container with ARSAT-1 emerges from the An-124 cargo aircraft after its arrival at Félix Eboué International Airport.

Transported by a chartered An-124 cargo jetliner, ARSAT-1 landed yesterday at Félix Eboué International Airport near French Guiana's capital city of Cayenne. The satellite was then unloaded for transfer by road to the Spaceport’s clean room facilities, where it is to undergo pre-launch processing. ARSAT-1 was produced for Argentine satellite operator ARSAT (Empresa Argentina de Soluciones Satelitales Sociedad Anonima) by the company INVAP, with Airbus Defence and Space and Thales Alenia Space as leading equipment suppliers. This spacecraft will deliver a wide range of telecommunications, data transmission, telephone and television services across all of Argentina, Chile, Uruguay and Paraguay – operating from an orbital position of 72 degrees West following its deployment by Ariane 5.

The ARSAT-1 satellite will be orbited along with its co-passenger, Intelsat DLA-1, on another of Ariane 5’s trademark dual-payload missions. Built for international operator Intelsat by SSL (Space Systems/Loral), DLA-1—together with the DLA-2 satellite that will be lofted on a future flight—is to greatly expand DTH entertainment offerings in Latin America, as well as provide backup and restoration services. Arianespace’s mission with ARSAT-1 and Intelsat DLA-1 is designated Flight VA220 in the company’s launcher family numbering system.

Additionally, Thomas Hundt is joining Arianespace as Chief Financial Officer on September 1, 2014. He will be a member of the company’s Executive Committee and report to Chairman and Chief Executive Officer Stéphane Israël.

Thomas Hundt holds a degree in business economics from the Cooperative State University Stuttgart and an Executive MBA from IMD in Lausanne, Switzerland. He has more than 15 years of experience in finance and management control, first in Panavia (1998-2000) and then in the Airbus Group (2000-2014) in various international financial management positions, especially in the Space industry. From 2011 to August 2014, Thomas Hundt has been Vice President Financial
Control for the Earth Observation, Navigation and Science satellite activities of Airbus Defence and Space and Director Finance of Astrium Satellites GmbH in Friedrichshafen (Germany).

Thomas Hundt will bring to Arianespace his extensive experience in the space industry and his recognized skills in the area of finance.