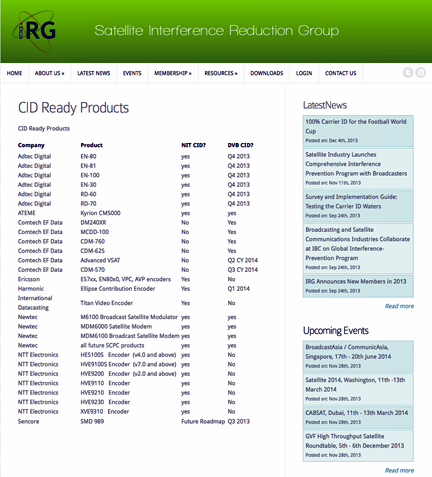 [SatNews] The Satellite Interference Reduction Group (IRG) has launched its campaign to achieve Carrier Identification (CID) implementation on all video carriers for the Football World Cup in 2014.

The initiative was first announced during the IRG Annual Conference in Rio de Janeiro in October, where the group’s Executive Director lay down the gauntlet to those present to make that happen. This announcement follows the success of a similar campaign leading up to the London Olympics, where half of the carriers had ID. This resulted in very few instances of interference, and the hope is that the industry can take it one step further in time for the Football World Cup in 2014.

“We are entering the challenging part of implementing CID,” commented Martin Coleman, Executive Director, IRG. “We have the ETSI standard, fantastic, but now the hard work begins! Building the system, databases and processes, and ensuring widespread implementation and getting the users to turn CID on!”

The Space Data Association and Analytical Graphics Inc. showed the first demonstration of the prototype CID database at the recent IRG conference in Brazil. The creators are now encouraging feedback and input from the industry in order to build the final working database. The other part of this campaign is to educate users about CID and, most importantly, how to turn CID on.