A motor built by Aerojet Rocketdyne for the Launch Abort System (LAS) on NASA’s Orion spacecraft was successfully tested by engineers at the Redstone Test Center on Redstone Arsenal in Huntsville, Alabama, October 16.

During the third and final hot fire test, the jettison motor was fired for under two seconds in ambient temperatures to produce more than 40,000 pounds of thrust. With the series of static tests completed, Orion’s LAS jettison motor is qualified and ready for flight on the Artemis II mission with astronauts. 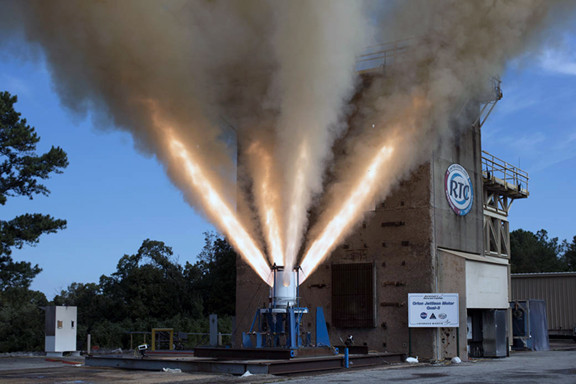 The LAS will safely lift the Orion crew module away from the launch vehicle in the event of emergency on the launch pad or during ascent. It consists of three solid rocket motors: the abort motor pulls the crew module away from the launch vehicle; the attitude control motor steers and orients the capsule; then the jettison motor ignites to separate the launch abort system from Orion for parachute deployment and a safe crew landing. The jettison motor also is the only part of the LAS that operates during normal mission scenarios, and detaches from Orion once it is no longer needed.

The jettison motor is built by Aerojet Rocketdyne through a contract by NASA’s prime contractor for Orion, Lockheed Martin. The launch abort system was stress tested earlier this year during the successful Ascent Abort-2 test.

NASA’s Artemis lunar exploration program includes sending a suite of new science instruments and technology demonstrations to study the Moon, landing the first woman and next man on the lunar surface by 2024, and establishing a sustained presence by 2028.  Orion will sustain astronauts in deep space, provide emergency abort capability, and support a safe re-entry from lunar return velocities. The agency will leverage its Artemis experience and technologies to prepare for the next giant leap – sending astronauts to Mars.