[SatNews] According to the Kommersant newspaper, "product 14F142" is on the launch schedule by Russia for Q4 of this year. 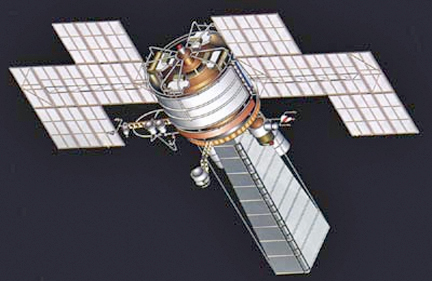 Artistic rendition of the Russian Oko-1 satellite, which will be replaced by 'product 14F142' later this year.

The 14F142 will be pushed into a Tundra orbit (an identical orbit as the Oko-1, but with twice the orbital period) via a Soyuz2.1b launch vehicle, with Kommersant reporting that the instruments payload were built by Kometa Corporation. These instruments are purported to be able to identify cruise missile launches as well as firings from submarines. The flight parameters of launched missiles will also be calculated, which will aid Russian ground based radar stations to lock onto in-flight targets—with a like response then likely from the Russian military once launches have been ID'd, calculated and their intentions determined.

This new satellite has, apparently, been in development since 2000 but, due to various concerns and legal actions by the Russian company Energia and the country's Defense Ministry, delay after delay set in for this Unified Space System. The newspaper now indicates all of the rancor and disagreements between the various entities have been negated and the launch for 14F142 is imminent.