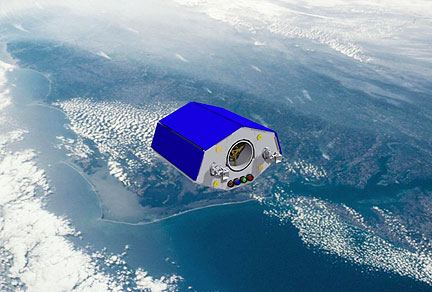 Artistic rendition of NigeriaSat2, courtesy of SSTL
[SatNews] A request for "peace" between to Nigerian agencies and launch expectations...

Science and Technology Minister, Prof. Mohammed Kaoje Abubakar, who is now leaving this office, has urged officials of the National Space Research and Development Agency (NASRDA) and Nigerian Communications Satellite (NIGCOMSAT) Limited to close ranks by maintaining the peace between them. The minister spoke in Abuja when he talked with the board of NIGCOMSAT, led by former Science and Technology Minister, Prof. Turner Isoun. In a veiled reference to the bickering and altercations of top officials of the two agencies over supremacy, Prof. Abubakar affirmed his commitment to ensuring that NIGCOMSAT attains a full-fledged parastatal status under the Science and Technology Ministry "to erase doubts as to its legal status" by asking the Permanent Secretary, Dr. Dere Awosika, to engage all concerned to ensure that this is achieve' within the shortest possible time. The minister said it was out of place for NASRDA to create the impression that it is the singular authority to launch satellites in Nigeria, adding that this could potentially prevent any smooth enterprise in the sector. He added that the proper thing to do was for NASRDA to seek ways of cooperating with NIGCOMSAT Limited bring into reality the plan for space development and national growth.

Abubakar said he was satisfied with the work of NIGCOMSAT Managing Director, Ahmed Rufai, hence his recommendation for a fresh four-year term to the President in June last year. The minister enjoined the management of both agencies to cooperate and work in harmony, ensuring that both work for the good of Nigeria and asked the NIGCOMSAT Isoun to see that through during his tenure. The minister said he had goodwill towards all the agencies under his command. (Source: TNV (The Nigerian Voice).)

An additional development on the Nigerian space front was the NASRDA announcement regarding the launch of two satellites into the orbit before the end of this month, to complement the existing NigeriaSat-1. Known as NigeriaSat-2 and NigeriaSat-X, the satellites will be launched before the end of June. The agency’s Head of Corporate Affairs, Mr. Felix Ale, stated this during a lecture delivered at OSRC Chapel of the Nigeria Union of Journalists (NUJ) in Akure. Ale said the satellites would provide a high resolution system to map Nigeria once in every four months. According to him, “the satellites would support the National Geospatial Data Infrastructure (NGDI) program of the government by providing high quality data and enhance human resources in the use of satellite data. (Source: Vanguard, by Dayo Johnson.)