The number of video households served by SES has continued to increase, reaching 351 million TV homes in 2017, this according to SES’s annual market research, Satellite Monitor.

This substantial technical reach compared with 325 million households in 2016 means that SES is now delivering video content to more than 1 billion global viewers.SES’s increased technical reach reflects the expansion of the survey with the addition of new countries (Ethiopia, Tanzania, Uganda and Turkey) and the wider reach of Yahlive, namely in the Maghreb countries, together accounting for 17 million more SES TV homes. On a like-for-like basis, the technical reach grew by 9 million SES TV homes, mainly in Nigeria, Ghana and the Middle East. 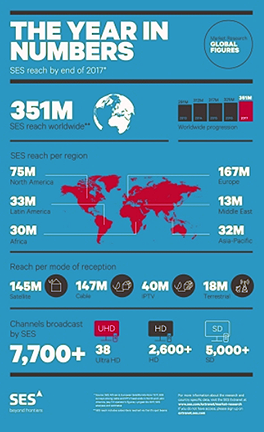 Infographic is courtesy of Business Wire.

The Satellite Monitor reveals that Europe continues to be a strong and resilient market where satellite broadcasting is a highly attractive platform for reliable and cost-effective video delivery to large audiences. SES now reaches 167 million TV homes in Europe, up from 156 million in 2016. This growth is mainly driven by the addition of Turkey and the additional reach of Yahlive in the Maghreb countries, which together represent an increase of 10 million TV homes. Technical reach across the core markets in Europe was stable.

Ferdinand Kayser, CEO of SES Video, said that the Satellite Monitor shows that the firm's strategy to invest in growth markets is successful and results in a significantly larger geographical reach. SES continues to leverage the company's growing, unique technical reach worldwide to help customers build their businesses and expand their audiences. In Africa, the SES infrastructure will continue to play a key role in the digital switch-over, while in developed countries, namely Europe, SES satellites remain the leading platform to deliver HD and drive Ultra HD to millions of households. The company is also strongly supporting the development and roll-out of HD and Ultra HD in the Americas and Asia Pacific.