A 3D engine mount from RUAG Space will be the first 3D printed part on the moon. 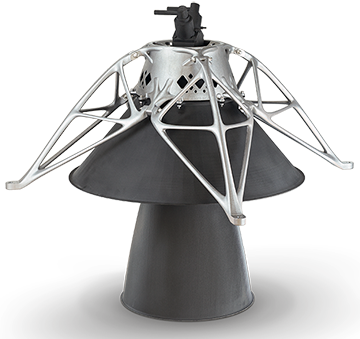 The 3D printed bracket from RUAG Space is holding the engine of the lunar lander. Photo is courtesy of RUAG Space and SpaceIL.

The lunar lander of the private Israeli company SpaceIL is scheduled to land on the moon on Thursday, April 11. A rocket carrying the spacecraft lifted off from Earth two month ago in mid-February on its journey to the moon. 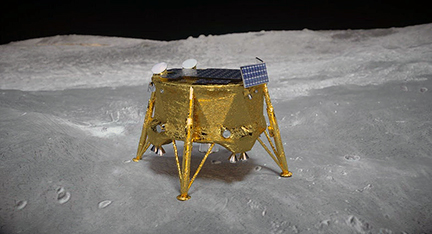 The Lunar Lander of the Israeli company SpaceIL. Image is courtesy of SpaceIL.

This is the historice — and first  — private initiative to land a spacecraft on the moon.

After landing on the lunar surface, the spacecraft is scheduled to send back photos and videos as well as data about the moon’s magnetic field.

Peter Guggenbach, the CEO of RUAG Space, said the company's 3D part will support landing and lift off of the spacecraft on the moon. The spacecraft will use a 3D printed aluminum structure developed by RUAG Space for its main engine. RUAG Space is a pioneer in offering 3D Printing solutions to space and, since 2014, RUAG Space has developed space components based on Additive Manufacturing (3D Printing) technology. RUAG Space designed the 3D part and qualified it for space. For the production of the 3D printed structure RUAG Space, contracted U.S. Company MORF3D, a leader in Additive Manufacturing solutions for the Aerospace industry.
Guggenbach added that with 3D Printing, customers profit from a quicker and more cost-efficient production. 3D Printing also enables to produce lighter metal or plastic components, as weight reduction is a decisive factor in the space industry. In addition to lighter parts, 3D Printing also allows the production of geometries that provide higher performance at a lower mass when compared to conventional production means.