Arianespace has successfully launched the Ariane 5 ECA with its twin passengers, NSS-12 and THOR 6, from the Spaceport in French Guiana.

Lifting off on time at 5:00 p.m. from the Spaceport in French Guiana, the Ariane 5 deployed the two television broadcast satellites during a mission lasting 31 minutes. This was the 48th flight of an Ariane 5 and its 34th success in a row. Ariane 5’s payload lift performance for the daytime flight was a total of 9,515 kg., which included a combined total of approximately 8,700 kg. for the NSS-12 and THOR 6 spacecraft, plus the launch vehicle’s dual-passenger dispenser system and satellite integration hardware. 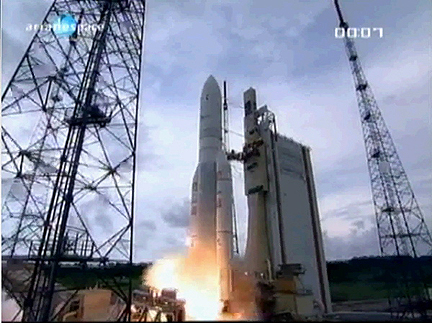 This mission with NSS-12 continues Arianespace’s 25-year relationship of uninterrupted cooperation with the SES Group of companies, which was initiated in 1984 with the launch of Spacenet 1 on the inaugural commercial Ariane mission performed by Arianespace. The NSS-12 satellite was released first during today’s launch, being deployed at 26 minutes into the flight. With a liftoff weight of approximately 5,620 kg., this spacecraft carries 40 C-band and 48 Ku-band transponders to provide telecommunications and direct-to-home television broadcast services for Europe, the Middle East, Africa, Asia and Australia. It will be operated by SES WORLD SKIES from a geostationary orbit location of 57 deg. East, and is the second satellite launched by Arianespace this year for the SES group — following NSS-9, which was orbited by Ariane 5 in February. NSS-12 was produced by Space Systems/Loral and is the 35th platform from this U.S.-based satellite manufacturer that Arianespace has launched.

THOR 6 was carried in the lower passenger position of Ariane 5’s payload “stack,” and it separated from the launcher at 31 minutes into the flight. Built in Europe by Thales Alenia Space, the 3,050-kg. satellite is fitted with 36 Ku-band transponders and will deliver high-power, direct-to-home television services from an orbital location of 1 degree West. When in service for Telenor Satellite Broadcasting, the capacity provided by THOR 6 will respond to the growing broadcast demands within Central and Eastern Europe and also provide additional capacity in the Nordic region. Arianespace’s next mission is planned for early December with the Helios 2B French military reconnaissance satellite, marking Ariane 5’s final flight of this year.