Expectations By Berg Insight Is For Wireless IoT Devices To Reach 43.5 Million By 2020

[SatNews] According to a new research report from the analyst firm Berg Insight, the installed base of wireless IoT devices in industrial automation reached 10.3 million in 2014.

The number of wireless IoT devices in automation networks will grow at a compound annual growth rate (CAGR) of 27.2 percent to reach 43.5 million by 2020. There is a wide range of wireless technologies used in industrial automation with different characteristics and use cases. 802.15.4 based standards such as WirelessHART and ISA100.11a are major contenders at the field level in process automation networks. Wi-Fi and Bluetooth are the most widespread technologies in factory automation while cellular connectivity typically is used for remote monitoring and backhaul communication between plants. The increasing popularity of Ethernet based networks in factory automation is one of the key drivers for the popularity of Wi-Fi in such applications. Increased usage of standard devices such as tablets and smartphones in for example mobile HMI solutions is also an important driver for the adoption of Wi-Fi as well as Bluetooth in automation equipment. 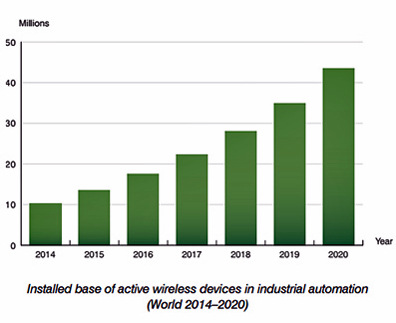 “Companies are now deepening the integration between industrial automation systems and enterprise applications and the promise of IoT is getting more tangible by the day”, said Johan Svanberg, Senior Analyst, Berg Insight. Large multinational corporations are beginning to systematically develop and adopt best practices to maximise the benefits of IoT technology in every part of their organisations. IT/OT convergence, smart factories, Industry 4.0 and the Industrial Internet of Things are all concepts which are part of the ongoing evolution of industrial automation. Innovation in sensor technology, wireless connectivity, energy harvesting, 3D printing, big data and cloud solutions along with seamless exchange of information between devices, systems and people paves the way for improved performance, flexibility and responsiveness throughout the enterprise value chain.”