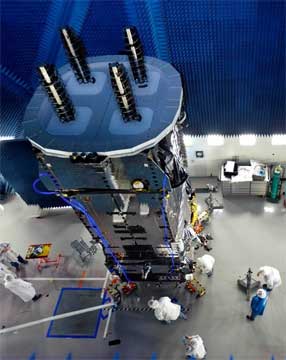 (Used by permission of The Boeing Company)
[SatNews] Incompatibility in the world of SATCOM for the warfighter isn't just an inconvenience...it can prove deadly...

It’s pretty cool to think about the power of satellite communications (SATCOM), and the advantages it provides for our military customers. What’s definitely not cool is the fact that interoperability issues between different generations of UHF equipment can prevent those advantages from reaching the warfighter in the field.

Recently we tried to reduce the likelihood of interoperability issues arising. During the month of November, an industry team led by Intelsat General conducted a UHF legacy terminal compatibility test to verify interoperability between legacy UHF radios and the UHF hosted payload onboard the Intelsat 22 spacecraft (IS-22). IS-22 is scheduled to go into space in a few months.

The IS-22 spacecraft carries three payloads: commercial C and Ku, and UHF for the Australian Defence Force.  The UHF payload is an example of a “hosted payload”, whereby a dedicated government mission shares the commercial satellite platform. For IS-22, the customers are the Australian Defence Force and the U.S. Department of Defense, both of which need expanded UHF capabilities over the Indian Ocean, Africa, Europe, Asia and, of course, Australia.

Any time new payload designs are developed, questions arise regarding the payload’s compatibility with existing equipment being used in the field....