[SatNews] This flight lasted nearly a week and consumed some 4 million kilometers of space flight. 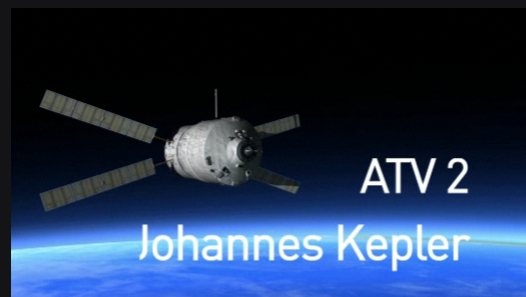 ATV-2 “Johannes Kepler”, the second unmanned supply vehicle built by Astrium for the European Space Agency (ESA), has executed a perfect maneuver to dock automatically with the International Space Station (ISS). The Automated Transfer Vehicle (ATV) successfully attached to the ISS at 4:59 p.m. CET and is now on target to accomplish its ISS supply and orbit-raising mission, where it will become an integral, inhabited part of the ISS. ATV-2 “Johannes Kepler” brings more than 7 metric tons of net freight for the space station, including 850 kilograms of fuel, 100 kilograms of oxygen and more than 1.6 metric tons of stores and provisions. ATV-2 “Johannes Kepler” also brings clothing for the astronauts, scientific experiment Geoflow II, built by Astrium for ESA, as well as various items of equipment that are necessary for conducting repairs and for the general operation of the ISS. The ATV additionally carries 4.5 metric tons of fuel for the re-boost maneuvers which will lift the ISS to an altitude of approximately 400 kilometres. In around three and a half months time, Johannes Kepler's mission will end with it being loaded up with waste, then undocking, de-orbiting and destruction as it burns up in the dense layers of the Earth’s atmosphere.