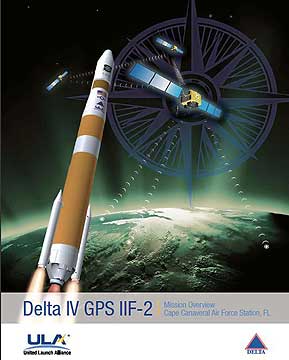 [SatNews] The first on-orbit signals are now being received... GPS IIF-2, renamed SVN-63, launched on a United Launch Alliance Delta IV vehicle today at 2:41 a.m. Eastern time from Cape Canaveral Air Force Station. Controllers confirmed initial contact with the spacecraft at 6:14 a.m. Eastern time at a ground station on Diego Garcia in the Indian Ocean. GPS signals from the spacecraft payload will be turned on for test purposes over the coming days. 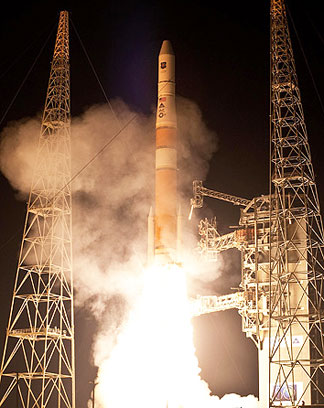 The launch of the GPS IIF-2 via a Delta IV launch vehicle... photo credit: United Launch Alliance photo by Pat Corkery
The ULA team is the launch provider for the U.S. Air Force (USAF) Global Positioning System (GPS) Directorate by delivering replenishment satellites aboard Atlas V and Delta IV rockets. GPS satellites serve and protect our warfighters by providing navigational assistance for U.S. military operations on land, at sea, and in the air.

Following launch, the Delta IV vehicle placed SVN-63 into medium Earth orbit. With safety checks completed, checkout will begin under the direction of the Air Force GPS Directorate. Checkout includes payload and system checks to verify operability with the GPS constellation of satellites, ground receivers, and the Operational Control Segment system. Boeing will officially turn over SVN-63 to the Air Force 50th Space Wing and the 2nd Space Operations Squadron this fall after the spacecraft completes on-orbit checkout.

Civilian users around the world also use and depend on GPS for highly accurate time, location, and velocity information. GPS IIF-2 is one of the next generation GPS satellites, incorporating various improvements to provide greater accuracy, increased signals, and enhanced performance for users.

=GPS uses 24 satellites, in six different planes, with a minimum of four satellites per plane, positioned in orbit approximately 11,000 miles above the Earth’s surface. The satellites continuously transmit digital radio signals pertaining to the exact time (using atomic clocks) and exact location of the satellites. The GPS IIF series have a design life of 12 years. With the proper equipment, users can receive these signals to calculate time, location, and velocity. 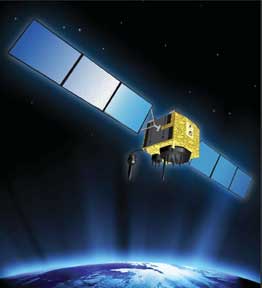 The signals are so accurate that time can be measured to within a millionth of a second, velocity within a fraction of a mile per hour, and location to within feet.

Receivers have been developed for use in aircraft, ships, land vehicles, and to hand carry. As a result of increased civil and commercial use as well as experience in military operations, the USAF has added the following capabilities and technologies to the GPS IIF series to sustain the space and control segments while improving mission performance: Overview DELTA IV MEDIUM+ (4,2) LAUNCH VEHICLE
Expanded The Delta IV Medium+ (4,2) consists of a single Delta IV common booster core (CBC), the Delta cryogenic second stage (DCSS), and two solid rocket motors (SRM). The CBC and the DCSS are connected by a composite cylindrical interstage adapter (ISA). The SRMs are connected to the booster by two ball-and-socket joints and structural thrusters.

The SRMs, with a 60 in diameter and 53 ft length, are constructed of a graphite-epoxy composite. The SRMs burn for approximately 94 seconds and are jettisoned approximately 100 seconds into the flight. 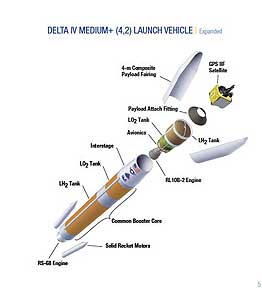 The RS-68 burns cryogenic liquid hydrogen and liquid oxygen and delivers 663,000 lb of thrust at sea level. The booster’s cryogenic tanks are insulated with a combination of spray-on and bond-on insulation and helium-purged insulation blankets.

The Delta IV booster is controlled by the DCSS avionics system, which provides guidance, flight control, and vehicle sequencing functions during CBC and DCSS phases of flight.

The boost phase of flight ends 6 seconds after main engine cutoff (MECO), when the separation charge in the interstage adapter is fi red and 16 pneumatic actuators push the spent Delta IV CBC stage and the DCSS apart.

The DCSS stage propellant tanks are structurally rigid and constructed of isogrid aluminum ring forgings, spun-formed aluminum domes, machined aluminum tank skirts and a composite intertank truss. The DCSS is also a cryogenic liquid hydrogen/liquid oxygen-fueled vehicle. It uses a single RL10B-2 engine that produces 24,750 lb of thrust. Like the CBC, the DCSS cryogenic tanks are insulated with a combination of spray-on and bond-on insulation, and helium-purged insulation blankets.

An equipment shelf attached to the aft dome of the DCSS liquid oxygen tank provides the structural mountings for vehicle electronics. The structural and electronic interfaces with the satellite are provided via the payload attach fitting (PAF). The GPS missions use a 4-m diameter payload fairing (PLF). The PLF is a composite bisector (two-piece shell) fairing. The vehicle’s height, with the 38.5-ft tall PLF, is approximately 206 ft.