Aerojet Rocketdyne Has The Power To Propel The Payload...Propulsion Delivers Precious Supplies To International Space Station 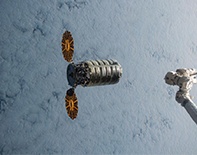 “Aerojet Rocketdyne has a long, successful history of delivering payloads to their destination, and our propulsion on this critical resupply mission continued to live up to that legacy,” said Peter Cova, acting vice president of Space Launch Systems at Aerojet Rocketdyne. “Our hardware performed exactly as expected, and all those who worked to ensure 100 percent mission success should be proud of their hard work and dedication. It wouldn’t happen without you.”

“The thrusters that fire on the spacecraft require pinpoint accuracy in order to help it berth with the International Space Station,” said Ron Felix, vice president and general manager of Space Systems at Aerojet Rocketdyne. “Knowing that our products help accomplish that goal is truly rewarding, especially when it comes to resupplying astronauts aboard the ISS with cargo that will ultimately benefit life here on Earth.”

After separation of the first stage several hundred miles above the Earth, a single Aerojet Rocketdyne RL10C-1 engine ignited to place the Cygnus spacecraft on its path toward a rendezvous with the ISS, helped by Centaur thrusters and pressurization tanks. The RL10C-1 engine delivers 22,890 pounds of thrust to power the Centaur, using cryogenic liquid hydrogen and liquid oxygen propellants during its operation. ARDÉ, a subsidiary of Aerojet Rocketdyne in New Jersey, provides the pressure vessels on the first and second stages on the launch vehicle, as well as one pressure vessel on Cygnus.

Following in-orbit activation shortly after launch, the 32 Aerojet Rocketdyne MR-106M 7 lbf monopropellant hydrazine thrusters on Cygnus will fire to perform required in-orbit maneuvers that allow the spacecraft to ultimately berth with the ISS.