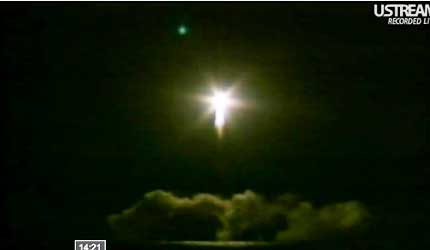 The moment of the launch is captured here.

[SatNews] It was a slow boat to the Equator, and in a matter of moments the launch took place...

Sea Launch AG has successfully launched the Intelsat 19 satellite from the Equator on the ocean-based Launch Platform Odyssey, completing its eleventh mission for Intelsat S.A. and marking Sea Launch’s first of three planned missions in 2012. 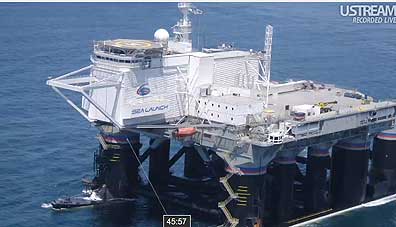 The Zenit-3SL rocket carrying the spacecraft lifted off at 22:23 Pacific Daylight Time (PDT) on Thursday, May 31st (05:23 UTC/GMT, Friday, June 1) from the launch platform, positioned at 154 degrees West longitude in the international waters of the Pacific Ocean. One hour later, the Block DM-SL upper stage inserted the satellite, weighing 5,600 kilograms (12,345 lbs.) and built by Space Systems/Loral, into geosynchronous transfer orbit, on its way to a final orbital position at 166 degrees East longitude. Operators at the Intelsat Launch Control Center acquired the spacecraft’s first signals from orbit shortly after spacecraft separation. All systems performed nominally throughout the launch mission.

"We are thrilled to complete our eleventh successful launch for Intelsat," Karlsen said. "We look forward to our next Intelsat mission in the third quarter of 2012, as well as future launches with our long-time colleagues at Space Systems/Loral. The Sea Launch and Energia Logistics teams have successfully met our commitments once again, and I want to personally thank all of them for their unwavering dedication and hard work." 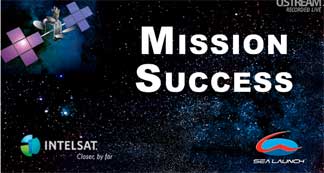 “Intelsat 19 will provide capacity specifically designed for our customers to offer enhanced media content delivery, broadband and mobility services across the Pacific Ocean region,” said Intelsat SVP and Chief Technical Officer Thierry Guillemin. “Intelsat 19 also hosts customized Ku-band mobility beams that will provide coverage over the Indian Ocean’s busiest shipping routes. We thank Sea Launch for successfully launching our spacecraft, and are glad to count them again as one of our trusted providers of access to space.”