At the United Launch Alliance (ULA) factory in Decatur, Alabama, production of the first Vulcan Centaur rocket continues, with shipment to the launch site at Cape Canaveral Air Force Station in Florida scheduled for late next year for processing in preparation for its first launch in 2021.

The Department of Defense (DoD) has established a selection strategy to ensure a smooth transition to a U.S. engine, while introducing competition, driving down costs and safeguarding continued assured access to space by preventing any capability gaps. Nearly one year ago, the U.S. Air Force held a competition and awarded three Launch Services Agreements for public-private partnerships to develop launch vehicles. Phase 2 is the next procurement in the Air Force’s strategy. 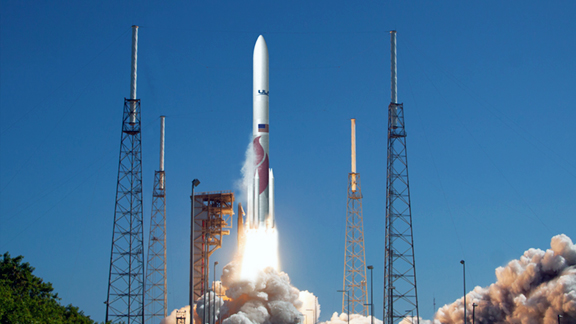 Artistic rendition of a Vulcan Centaur engaged in liftoff. Image is courtesy of United Launch Alliance.

In the factory, the fabrication of the structure for the first Vulcan Centaur rocket continues, and the team recently completed the booster structural test article in Decatur. In Florida, assembly of the new Mobile Launch Platform has begun in preparation for the first launch.

Tory Bruno, ULA’s president and CEO, said that Atlas and Delta rockets have been the backbone of national security space launch for decades, building on a progressive history of technology development and advancement — Vulcan Centaur will advance this rich heritage. Following the successful launch of the company's 134th mission just last week on the Atlas rocket, the firm submitted the purpose-built Vulcan Centaur rocket for the U.S. Air Force’s Phase 2 Launch Services competition. The nation is facing a contested space environment, and ULA is unleashing the energy of American ingenuity by developing Vulcan Centaur to meet the nation’s need for expanding space missions. Vulcan Centaur’s flight proven design, coupled with innovative technology, is transforming the future of space launch and will advance America’s superiority in space.
Bruno continued by adding that Vulcan Centaur will provide higher performance and greater affordability while continuing to deliver the firm's unmatched reliability and orbital accuracy precision from the company's treasured cryogenic Centaur upper stage. ULA is the best partner for national security space launch and is the only provider to demonstrate experience flying to all orbits including the most challenging heavy-class missions, providing the bedrock foundation for the lowest risk portfolio of two launch service providers for the U.S. Air Force.