NASA's — 'Hope And Change' To Return To Moon May Crash

SatNews is sharing this article from January 27, OrlandoSentinal.com: NASA's plans to return astronauts to the moon are dead. So are the rockets being designed to take them there — that is, if President Barack Obama gets his way.

When the White House releases his budget proposal Monday, there will be no money for the Constellation program that was supposed to return humans to the moon by 2020. The troubled and expensive Ares I rocket that was to replace the space shuttle to ferry humans to space will be gone, along with money for its bigger brother, the Ares V cargo rocket that was to launch the fuel and supplies needed to take humans back to the moon.

There will be no lunar landers, no moon bases, no Constellation program at all.

In their place, according to White House insiders, agency officials, industry executives and congressional sources familiar with Obama's long-awaited plans for the space agency, NASA will look at developing a new "heavy-lift" rocket that one day will take humans and robots to explore beyond low Earth orbit. But that day will be years — possibly even a decade or more — away.

In the meantime, the White House will direct NASA to concentrate on Earth-science projects — principally, researching and monitoring climate change — and on a new technology research and development program that will one day make human exploration of asteroids and the inner solar system possible.

There will also be funding for private companies to develop capsules and rockets that can be used as space taxis to take astronauts on fixed-price contracts to and from the International Space Station — a major change in the way the agency has done business for the past 50 years.

The White House budget request, which is certain to meet fierce resistance in Congress, scraps the Bush administration's Vision for Space Exploration and signals a major reorientation of NASA, especially in the area of human spaceflight. 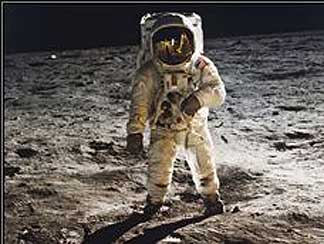 Buzz Aldrin on the lunar surface. Credit: NASA
"We certainly don't need to go back to the moon," said one administration official.

Everyone interviewed for this article spoke on condition of anonymity, either because they are not authorized to talk for the White House or because they fear for their jobs. All are familiar with the broad sweep of Obama's budget proposal, but none would talk about specific numbers because these are being tightly held by the White House until the release of the budget.

But senior administration officials say the spending freeze for some federal agencies is not going to apply to the space agency in this budget proposal. Officials said NASA was expected to see some "modest" increase in its current $18.7 billion annual budget — possibly $200 million to $300 million more but far less than the $1 billion boost agency officials had hoped for.

They also said that the White House plans to extend the life of the International Space Station to at least 2020. One insider said there would be an "attractive sum" of money — to be spent over several years — for private companies to make rockets to carry astronauts there.

But Obama's budget freeze is likely to hamstring NASA in coming years as the spending clampdown will eventually shackle the agency and its ambitions. And this year's funding request to develop both commercial rockets and a new NASA spaceship will be less than what was recommended by a White House panel of experts last year.

That panel, led by former Lockheed Martin CEO Norm Augustine, concluded that to have a "viable" human space-exploration program, NASA needed a $3 billion annual budget hike, and that it would take as much as $5 billion distributed over five years to develop commercial rockets that could carry astronauts safely to and from the space station.

Last year, lawmakers prohibited NASA from canceling any Constellation programs and starting new ones in their place unless the cuts were approved by Congress. The provision sends a "direct message that the Congress believes Constellation is, and should remain, the future of America's human space flight program," wrote U.S. Sen. Richard Shelby, R-Ala., last month.

Nevertheless, NASA contractors have been quietly planning on the end of Ares I, which is years behind schedule and millions of dollars over budget. NASA has already spent more than $3 billion on Ares I and more than $5 billion on the rest of Constellation.

In recent days, NASA has been soliciting concepts for a new heavy-lift rocket from major contractors, including Boeing Co., Lockheed Martin Corp. and Pratt & Whitney. Last week, a group of moonlighting NASA engineers and rocket hobbyists proposed variations on old agency designs that use the shuttle's main engines and fuel tank to launch a capsule into space. According to officials and industry executives familiar with the presentations, some of the contractor designs are very similar to the one pressed by the hobbyists.

Officially, companies such as Boeing still support Constellation and its millions of dollars of contracts. Some believe that in a battle with Congress, Ares may survive.

"I would not say Ares is dead yet," said an executive with one major NASA contractor. "It's probably more accurate to say it's on life support. We have to wait to see how the coming battle ends."

Few doubt that a fight is looming. In order to finance new science and technology programs and find money for commercial rockets, Obama will be killing off programs that have created jobs in some powerful constituencies, including the Marshall Space Flight Center in Shelby's Alabama. But the White House is said to be ready for a fight.

The end of the shuttle program this year is already going to slash 7,000 jobs at Kennedy Space Center.

One administration official said the budget will send a message that it's time members of Congress recognize that NASA can't design space programs to create jobs in their districts. "That's the view of the president," the official said.