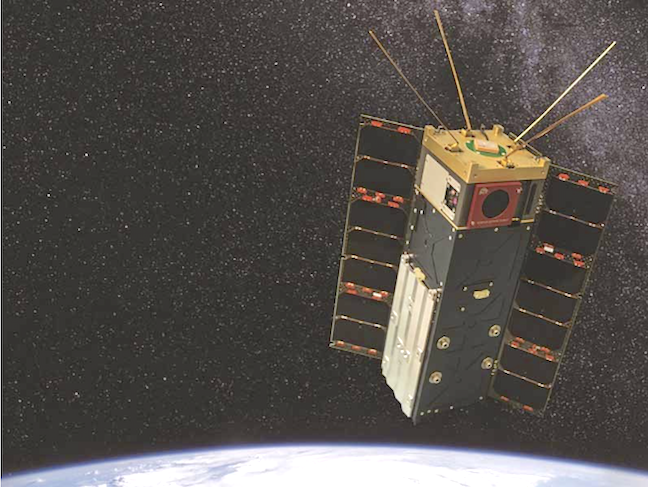 USU's Space Dynamics Laboratory announced today that it has delivered a small satellite designed for NASA to measure the microphysical properties of cloud water and ice particles. Pictured is a composite illustration of the HyperAngular Rainbow Polarimeter satellite. (Photo credit: NASA and SDL).

Utah State University’s Space Dynamics Laboratory announced today that it has delivered a small satellite designed for NASA to measure the microphysical properties of cloud water and ice particles.

The HARP CubeSat satellite was built by SDL to carry the HyperAngular Rainbow Polarimeter payload built by the University of Maryland, Baltimore County under the direction of principal investigator J. Vanderlei Martins. HARP is currently being prepared for launch by International Space Station small satellite launch service provider NanoRacks, LLC. HARP is scheduled to launch to the ISS in October aboard Northrop Grumman’s robotic resupply space freighter Cygnus at the Mid-Atlantic Regional Spaceport. HARP will be ejected into space following its placement on the ISS.

Cloud and aerosol processes influence weather variation, which affect our oceans, weather, and ecosystems. The largest impediments to estimating weather variation revolve around a lack of quantitative information about aerosol forcing and insufficient understanding of aerosol-cloud processes and cloud feedbacks in the climate system. Scientists require new observations and a better understanding of aerosol and cloud processes to narrow climate change estimate uncertainties. The HARP payload is a precursor for the new generation of imaging instruments to be used for the detailed measurements of aerosol and cloud properties.

“Working together with Dr. Martins and his team at UMBC as well as the NASA Earth Science Technology Office is a great example of academia, industry, and government working together to answer scientific questions for the benefit of mankind,” said Tim Neilsen, SDL program manager for HARP. “Among SDL’s responsibility was to design, build, and test the HARP spacecraft, which measures approximately 10 centimeters wide, 10 centimeters high, and 30 centimeters long, while UMBC developed and build the polarimeter payload. We look forward to the successful launch and deployment of HARP from the ISS.”

SDL also performed the integration and test of the payload instrument into the spacecraft and will be responsible for mission operations following the launch of HARP.

“The delivery of HARP continues SDL’s decades-long relationship with NASA building spaceflight hardware that supports their mission to drive advances in science, technology, aeronautics, and space exploration to enhance knowledge, education, innovation, economic vitality, and stewardship of Earth,” said Alan Thurgood, SDL’s director of Civil and Commercial Space. “For 60 years, the men and women of SDL have succeeded in providing technology with engineering quality and rigor that has enabled scientists to better understand links between Earth’s fundamental processes and the effects that nature and humans have on them.”