John Halligan TD, Minister for Training, Skills, Innovation, Research and Development, has announced that Ireland’s first satellite, EIRSAT-1, has successfully completed the first phase of the European Space Agency’s (ESA’s) Fly your Satellite! (FYS) Program, the Critical Design Review, and has now moved one step closer to launch into space.

Minister Halligan TD made the announcement during a visit to University College Dublin (UCD), where he met with the interdisciplinary team of 16 UCD postgraduate students who are building the satellite with the support of ESA’s Education Office. 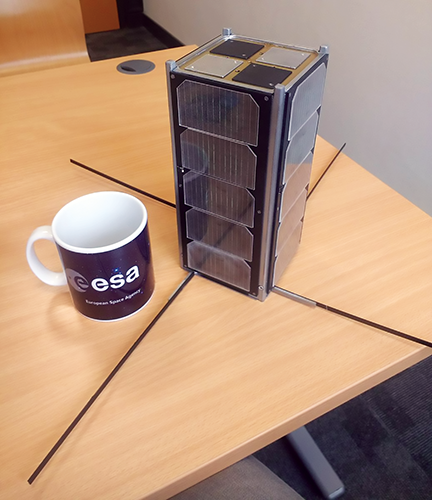 EIRSAT-1 (Educational Irish Research Satellite-1) is a smallsat and is comparable in size to that of an average shoebox. In May 2017, EIRSAT-1 was selected to be part of the second cycle of the FYS! Program. ESA has concluded that the objectives of the satellite’s Critical Design Review have now been achieved, marking an important milestone for the project. The UCD team now moves to the next phase of the program and will begin to assemble and test an EIRSAT-1 prototype in newly installed clean rooms at the University.

Subject to passing further reviews and mission milestones, EIRSAT-1 is expected to be delivered to ESA in mid-2020 with three scientific experiments on board. After subsequent launch, it is anticipated to operate for a 6 to 12 month period. Once on orbit, the satellite will communicate data to Earth through a ground radio station, located at EIRSAT-1 mission control in the UCD School of Physics.

The three EIRSAT-1 experiments, designed and developed in UCD, will include technology from Irish industry partners that include ENBIO and SensL (now part of ON Semiconductor).

The main experiment on-board EIRSAT-1 will be a novel gamma-ray detector, called GMOD, which aims to detect gamma-ray bursts, the most energetic explosions in the universe, which occur when some stars die or collide. The second experiment, EMOD, is an in-flight demonstration of thermal control coatings developed by the Irish company ENBIO Ltd. The third experiment, called Wave-Based Control, or WBC, tests a UCD-developed algorithm to control the movement of EIRSAT-1.

The EIRSAT-1 team includes students from the UCD Schools of Physics; Mechanical and Materials Engineering; Electrical and Electronic Engineering; and Mathematics and Statistics. The students, funded by the Irish Research Council, Science Foundation Ireland and ESA, are being supported by academic staff, postdoctoral researchers, technicians and industry mentors.

The EIRSAT-1 mission is supported by industry partners that include ENBIO, SensL (now part of ON Semiconductor) and Parameter Space.

Minister Halligan TD said that the EIRSAT-1 project provides the UCD student team with a great opportunity to develop skills in satellite development, a first in Irish space science education. The development of these skills will have an impact beyond those directly participating in the project, including in the expanding space industry sector in Ireland. Furthermore, UCD’s participation in the Fly Your Satellite! program has significant potential to drive an interest in space among students at all levels of education at a time when Ireland’s STEM capabilities are playing an increasingly important role in our international competitiveness.

Professor Lorraine Hanlon, UCD School of Physics and EIRSAT-1 Project Leader, added that cubesats, such as EIRSAT-1, are disrupting the traditional space sector globally, providing a fast and cost effective route to gaining spaceflight heritage. As an emerging space nation, Ireland’s future space endeavors will benefit from the skills developed by the talented team of UCD students who are building EIRSAT-1.

Professor Orla Feely, UCD Vice-President for Research, Innovation and Impact, congratulated the EIRSAT-1 team of UCD students on successfully completing the first phase of ESA’s Fly Your Satellite! program and wished them every success with the next phase of assembling and testing the satellite, adding that the Government’s recent announcement of Ireland's membership of the European Southern Observatory provides significant benefits for advancing the skills agenda and research excellence in the space sector in Ireland. A key objective of the EIRSAT-1 mission is through its success to inspire the next generation of students to study STEM subjects. The skills base and the research and development agenda are closely aligned, and both need continuing investment by Government to ensure that Ireland can maximize its return from global opportunities in the space sector. The ongoing implementation of the Innovation 2020 strategy is key to building critical mass in key areas of importance in the space sector in Ireland to the benefit of individual enterprises and the economy.