In the company's latest research titled,“FSS Operators: Benchmarks & Performance Review,” Euroconsult shows that 11 new FSS providers have emerged over the last five years, including two in 2018.

Many of these companies are state-owned national operators, which will mostly serve national interests. Twelve new satellite operators are planning to enter the FSS geostationary (GEO) market by the early to mid 2020s, including companies targeting national market such as NepalSat and Royal Group of Cambodia. Included in these twelve operators are three with plans for small GEO satellites, which may indicate a new trend in the FSS industry that is facilitated in part by digital payloads, electric propulsion and lower launch costs.

The research demonstrates that the market structure of the FSS industry remains concentrated at the top with growing fragmentation at the bottom. The top four operators (SES, Intelsat, Eutelsat and Telesat) today represent approximately 60 percent of the industry’s revenue, a share that has decreased in recent years. Five years ago, they combined for 64 percent of total revenue. The landscape behind the top five is rapidly evolving with three new companies joining the top ten in the past five years. These include YahSat, China Satcom, and ISRO.

Dimitri Buchs, Senior Consultant at Euroconsult and editor of the report, said analysis shows that FSS operators are exploring new strategies to address the evolving market. Euroconsult noted that several satellite operators are transitioning from sole wholesale bandwidth suppliers to managed services providers. This helps them increase the value they bring to their customers and minimize commodity pricing. Some satellite operators, such as SES, are even pushing toward end-to-end network solutions for selected markets and/or customers.

To meet data-driven market demand, the survey reports that many FSS operators are shifting their investments from traditional satellites to High Throughput Satellites (HTS). The number of FSS operators with an HTS payload doubled between 2014 and 2019, growing from 12 to 24, with the total HTS supply expected to reach more than two terabits per second by the end of 2019. 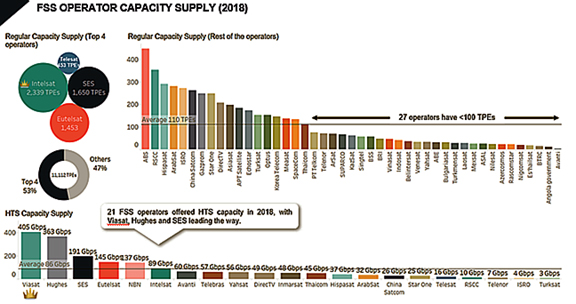 The market survey quantifies available capacity by operator, breaking out regular transponders in orbit versus gigabits per second of HTS capacity. It also addresses Non-Geostationary Orbit (NGSO) projects currently in development or planned. It discusses the projects that have progressed the furthest, which include OneWeb, Telesat LEO and SpaceX’s Starlink constellation, as well as other projects that could materialize in the longer term such as Amazon’s Project Kuiper and Chinese projects Hongyan and Hongyun.

Buchs added that the company's forecast is for FSS revenues to continue their downward trend in 2019. However, despite the overall environment, the market structure of the FSS industry has remained relatively stable, with the four top operators dominating the market. New growth segments, led by in-flight connectivity, maritime connectivity, and general broadband access, continue to drive demand for HTS capacity, and global interest in universal broadband access offers significant upside potential.

The Benchmarks & Performance Review survey provides insight into 50 Fixed Satellite Services (FSS) operators and their shifting strategies. The report reviews how market players are dealing with and adapting to the[DB2] market shift from television broadcast to data communications as new connectivity requirements and online services continue to expand, and it highlights the growing field of FSS players resulting in an increasingly competitive market.

This research can be ordered from the Euroconsult shop.