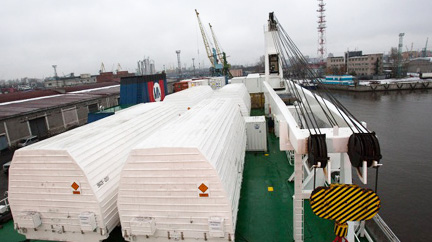 "The new schedule of work under the program of Soyuz launches from Guiana envisages the first launch of the Soyuz-ST-B carrier rocket on August 31, 2011," the design bureau's press service said. The rocket will carry two Galileo navigation satellites. The Soyuz-ST was originally scheduled to blast off with the French Hylas satellite on board from the European Space Agency's Kourou Space Center on December 17, 2010, but the launch was called off. The French operator said it was because it had become clear the Russian rocket would not be ready to fly by the end of the year. The Russian Federal Space Agency Roscosmos and France's launch services firm Arianespace sealed a deal in 2008 to launch 10 Soyuz-ST carrier rockets from Kourou. The Kourou Space Center's proximity to the Equator means it is nearly ideal for the launch of geostationary satellites and the Soyuz-ST will be able to orbit heavier satellites than those launched from Baikonur in Kazakhstan and Plesetsk in northern Russia. (Source: RIA Novosti)