The ATV Johannes Kepler is shown during processing in the Spaceport’s S5 payload preparation facility. In the photo at left, one of the solar arrays is checked after a verification of its deployment sequence from the ATV’s service module. Loading of the ATV’s cargo carrier is shown in the two photos at right.
[SatNews] The Automated Transfer Vehicle (ATV) to be orbited on Ariane's milestone 200th flight is a center of attention at the Spaceport in French Guiana as pre-launch preparations advance with this large resupply vessel for the International Space Station.

Named after the German astronomer and mathematician Johannes Kepler, the ATV is targeted for a February 15, 2011 liftoff on Ariane 5.  Its mission will mark the 200th flight of an Ariane since the start of operations with this launcher family in 1979, and is to deploy the ATV in low Earth orbit for a rendezvous with the International Space Station. 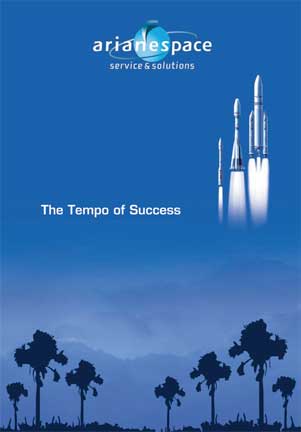 The February 2011 mission will be Arianespace's second launch of an ATV, having orbited the ATV Jules Verne in 2008.  These unmanned logistics spacecraft are part of Europe's contribution to the International Space Station's operation and maintenance.  Arianespace is responsible for their launch, with six ATV flights currently included in the company's manifest.