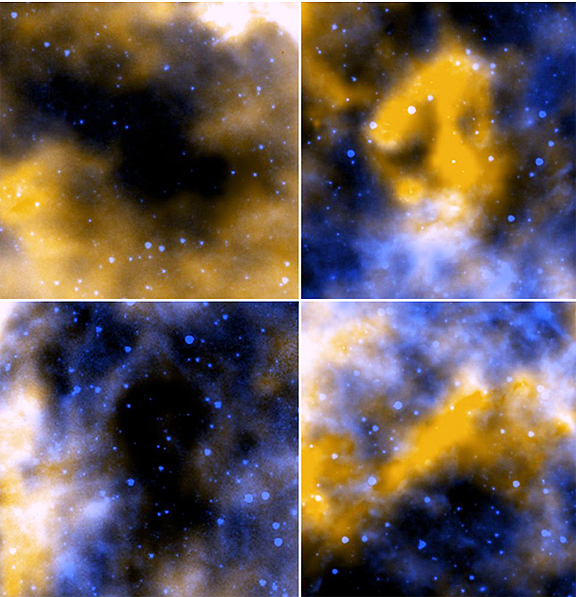 Examples of images of two holes in space (left) and two dark clouds (right). The Spitzer images, showing warm dust and stars, are in blue, while the far-infrared light that Herschel sees, showing the much colder dust, is shown in gold.
Image credit: ESA/Herschel/SPIRE/Hi-GAL Consortium ; NASA/JPL-Caltech
[SatNews] Astronomers using Europe’s Herschel Space Observatory are asking the public to help...

Dust clouds don’t come in simple shapes, and so the process of distinguishing between dark clouds and holes is incredibly difficult to do. Luckily, the ideal tool is at hand: The human eye. Observations from the Spitzer satellite show dark regions in the middle of bright clouds of interstellar gas and dust. These were previously assumed to be dense clouds of much colder dust, which Spitzer’s infrared cameras cannot see, and which appear silhouetted against the background light.

The Herschel Space Observatory observes far-infrared light, allowing it to see much colder dust than Spitzer. The expectation was that these dark regions would glow brightly in Herschel’s images, allowing astronomers to study them in greater detail. The Hi-GAL survey, one of the largest Herschel observing programs, is mapping the entire plane of our galaxy. By observing these far-infrared wavelengths, it is possible to identify much colder regions than with other infrared satellites, and has resulted in a huge number of discoveries—and surprises. 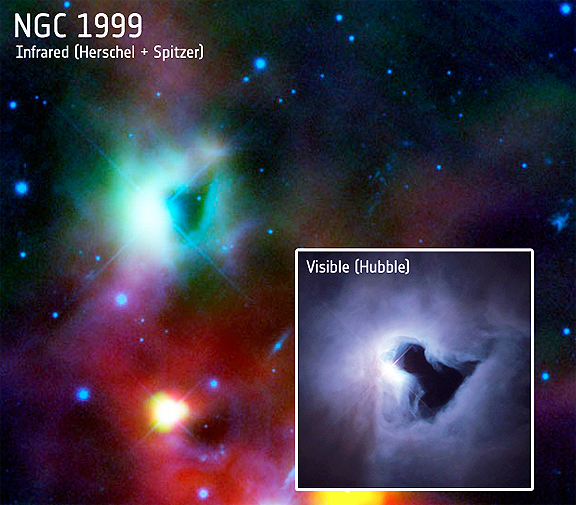 When this dark region on the nebula NGC1999 was observed in visible light (inset), and from ground-based infrared telescopes (main image, green/blue) it was assumed to be caused by a dark cloud of cold dust. But Herschel’s far-infrared observations (main image, red/yellow) also showed a dark area, telling astronomers that there really is nothing there – it is a hole in the nebula, blown by the bright star just to the left.
Image credit: ESA/Herschel/PACS/HOPS/NOAO (main image) ; NASA/ESA/STScI (inset)
“We were surprised to find that some of these dark clouds were simply not there, appearing dark in Herschel’s images as well,” said Derek Ward-Thompson, from University of Central Lancashire, who is leading this study. “We immediately set about trying to find out how many of these were really there, and how many were holes in space”.

The problem proved more complex than the team had anticipated. “The problem is that clouds of interstellar dust don’t come in handy easy-to-recognise shapes”, Derek explained. “The images are too messy for computers to analyse, and there are too many for us to go through ourselves”. 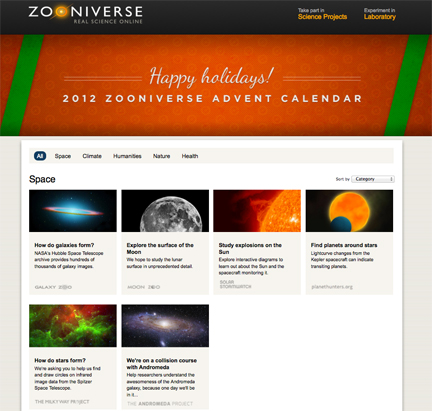 This is where the Zooniverse comes in, with its community of citizen scientists poised ready to help out. The new images are part of the Milky Way Project, which launched two years ago and, through the efforts of over 40,000 volunteers, has already created astronomy’s largest catalogue of star-forming bubbles, as well as a plethora of nearby star clusters, distant galaxies and more. The Milky Way Project volunteers are excellent at measuring and mapping our galaxy.

“What we’ve seen across all our projects is that the human brain can classify some images more quickly and reliably than computers can,” said Robert Simpson, the Zooniverse lead for this project. “We’re delighted to welcome Herschel into the Zooniverse.”

“This is Herschel’s first citizen science project. It will be exciting to follow the progress in the coming months!” said Göran Pilbratt, the ESA Herschel Project Scientist.