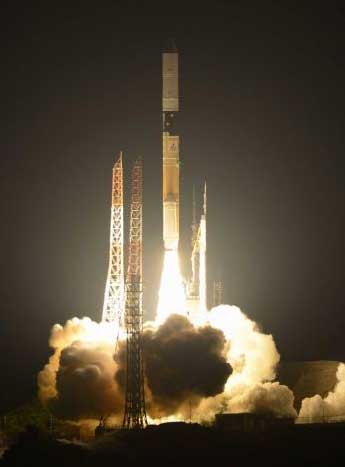 [SatNews] A first is always exciting, and so it is with the launch of...

Japan successfully put a South Korean satellite into space Friday, venturing their first step into the European- and Russian-dominated world of commercial launches. Named "SHIZUKU" or Water, the HII-A rocket launched off from a remote southwestern Japan island carrying the South Korean satellite and three Japanese satellites on May 18. All stages are proceeding as planned according to live images relayed by the Japan Aerospace Exploration Agency (JAXA).

Mitsubishi Heavy Industries, a private company in charge of HII-A rocket production since 2007, is hoping to compete with the U.S., Russia and Europe as launch-vehicle provider. The Korean satellite, KOMPSAT-3, was developed by the Korea Aerospace Research Institute to monitor the environment. The rocket also carried Japan's Shizuku satellite to monitor climate change and two smaller Japanese satellites.

“The rocket is following its programmed trajectory,” said a commentary which ran alongside the images of the launch. It was the 21st launch since 2001 of the H-IIA rocket, which was developed by JAXA. It has been operated by Mitsubishi Heavy Industries (MHI) since its 2007 privatization, JAXA spokesman Masashi Okada said. Its last six launches were Japanese government-related missions.

The institute paid several billion yen, “the cheapest price in an international auction”, the Sankei Shimbun reported, citing the institute. MHI declined to confirm the report.

The rocket also put into space JAXA’s Shizuku satellite, which will be used to monitor the circulation of global ocean currents, officials said. The other two satellites were small experimental Japanese models.

The Global Change Observation Mission 1st - Water "SHIZUKU", which was launched from the Tanegashima Space Center on May 18, completed its critical operations as it was successfully inserted into the initial orbit and finished the AMSR2 run-up and other essential events normally. JAXA will take about 45 days to insert the satellite into the "A-Train orbit" in order to participate in an Earth observation mission called the "A-Train" in cooperation with satellites of other countries while performing the initial functional confirmation for about three months.