Progress Pushes Off From Baikonur For ISS 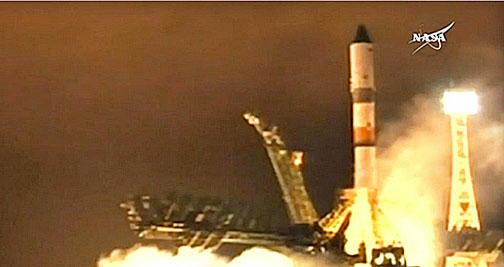 A Russian Progress supply ship lifts off from Baikonur en route to ISS.

Photo is courtesy of NASA TV.

[Satnews] On the spatial pathway to the International Space Station (ISS) is a Russian Progress supply spacecraft.

Launched on March 31st from the Baikonur Cosmodrome, this Progress MS spacecraft is expected to link up with the ISS on April 2. The launch was initiated at 12:23 p.m. EDT on the 31st with a payload of some three tons of equipment and necessary supplies which include nearly 2,000 pounds of propellant which would be used should orbital adjustments be required by ISS.

A number of improvements have been incorporated into the MS series. They include an improved rendezvous system known as KURS, docking system redundancy, sturdier shielding for those nasty bits and pieces that occupy orbital space, a newly designed digital radio system and the new communications gear that will be able to contact Russian communication satellites to send telemetry information to ground stations.