‘Comet Interceptor’ has been selected as ESA’s new fast-class mission in its Cosmic Vision Program. Comprising three spacecraft, it will be the first to visit a truly pristine comet or other interstellar object that is only just starting its journey into the inner Solar System. 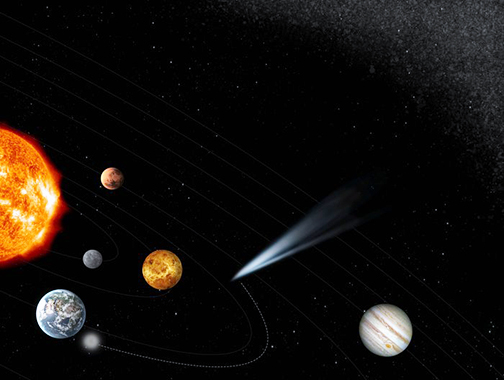 Comet Interceptor has been selected as ESA’s new fast-class mission. It will be the first spacecraft to visit a truly pristine comet or other interstellar object that is only just starting its journey into the inner Solar System. Image is courtesy of ESA.

The mission will travel to an as-yet undiscovered comet, making a flyby of the chosen target when it is on the approach to Earth’s orbit. Its three spacecraft will perform simultaneous observations from multiple points around the comet, creating a 3D profile of a ‘dynamically new’ object that contains unprocessed material surviving from the dawn of the Solar System.

Comet Interceptor is a ‘fast’, or F-class mission. The ‘fast’ refers to the implementation time, with a total development duration from selection to launch readiness of about eight years. F-class missions, which have a launch mass of less than 1000 kg., will share the ride into space with a medium-class mission, taking advantage of additional space in the launcher and the boost to the Sun-Earth Lagrange point L2, which is 1.5 million kilometres ‘behind’ Earth as viewed from the Sun. 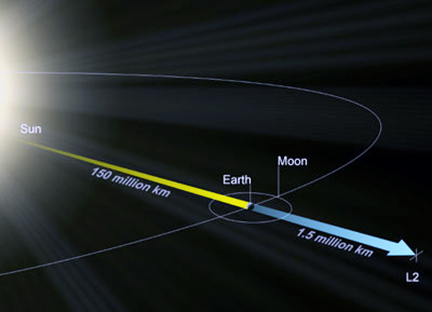 Comet Interceptor is foreseen for launch as co-passenger with ESA’s exoplanet-studying Ariel spacecraft in 2028. Both missions will be delivered to L2 and from there Comet Interceptor will journey onwards to the chosen target using its own propulsion system.

The selection process has also been fast. Following a call for missions in July 2018, 23 pitches were submitted by the space science community, with six teams subsequently invited to provide more detailed proposals. Among them, Comet Interceptor was chosen at today’s Science Program Committee to move into a more detailed definition phase. 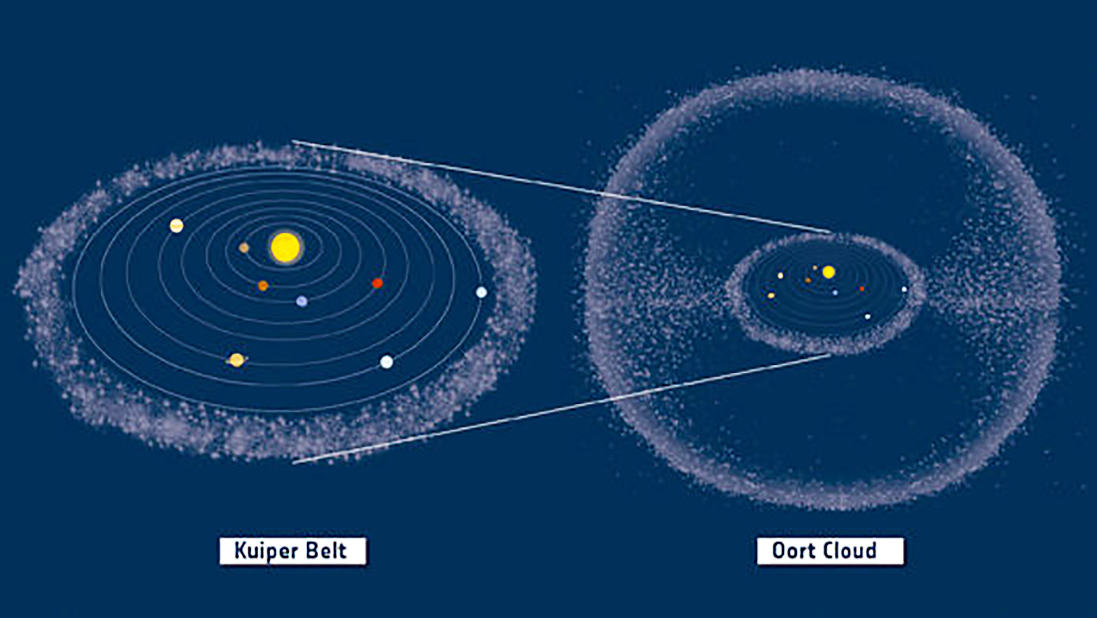 Illustration showing the two main reservoirs of comets in the Solar System: the Kuiper Belt, at a distance of 30–50 astronomical units (AU: the Earth–Sun distance) from the Sun, and the Oort Cloud, which may extend up to 50 000–100 000 AU from the Sun.

Halley’s comet is thought to originate from the Oort Cloud, while 67P/Churyumov–Gerasimenko, the focus of ESA’s Rosetta mission, hails from the Kuiper Belt. The comet is now in a 6.5-year orbit around the Sun between the orbits of Earth and Mars at its closest and just beyond Jupiter at its furthest. Image is courtesy of ESA.

Comet Interceptor comprises three spacecraft. The composite spacecraft will wait at L2 for a suitable target, then travel together before the three modules separate a few weeks prior to intercepting the comet. Each module will be equipped with a complementary science payload, providing different perspectives of the comet’s nucleus and its gas, dust, and plasma environment. Such ‘multi-point’ measurements will greatly improve the 3D information needed to understand the dynamic nature of a pristine comet while it is interacting with the constantly changing solar wind environment.

The mission’s instrument suite will draw on heritage from other missions, including a camera based on the one currently flying on the ExoMars Trace Gas Orbiter, along with dust, fields and plasma instruments, as well as a mass spectrometer, like those that flew on ESA’s Rosetta.

Previous comet missions, including ESA’s pioneering spacecraft Giotto and Rosetta, encountered short-period comets. These are comets with orbital periods of less than 200 years that have approached the Sun many times along their orbits in relatively recent times and as a consequence have undergone significant changes: Rosetta’s comet, 67P/Churyumov-Gerasimenko orbits the Sun once every 6.5 years while Comet 1P/Halley, visited by Giotto and other spacecraft in 1986, returns every 76 years.

Comet Interceptor is different because it will target a comet visiting the inner Solar System for the first time – perhaps from the vast Oort cloud that is thought to surround the outer reaches of the Sun’s realm. As such, the comet will contain material that has not undergone much processing since the dawn of the Sun and planets. The mission will therefore offer a new insight into the evolution of comets as they migrate inwards from the periphery of the Solar System. 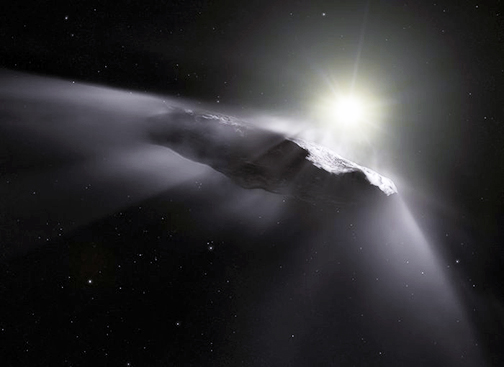 Observations since its discovery in 2017 show that the object is slightly deviating from the trajectory it would be following if it were only influenced by the gravity of the Sun and the planets. Researchers assume that venting material from its surface due to solar heating is responsible for this behavior. This outgassing can be seen in this artist’s impression as a subtle cloud being ejected from the side of the object facing the Sun.

Previously ‘Oumuamua was classified as an asteroid, but the outgassing is more typical of comets. Image is courtesy of ESA/Hubble, NASA, ESO, M. Kornmesser.

In the past, ‘new’ comets have only been discovered a few months to years before they pass through their closest approach to the Sun, which is too short notice to plan, build and launch a space mission, and for it to travel  to the specific object before it moves away from the Sun again.

Recent advances in ground-based surveys mean that the sky can be scanned more deeply and longer notice can be provided. Pan-STARRS is currently the most prolific comet discovery machine, with more than half of all new comets per year uncovered by the survey. The Large Synoptic Survey Telescope, currently under construction in Chile, will also greatly increase the catalogue of new comets.

In any case, the destination for Comet Interceptor does not need to be known while the mission is being prepared; the spacecraft can be ready and waiting in space for a suitable comet encounter, and is expected to complete its mission within five years of launch.

Günther Hasinger, ESA’s Director of Science, said that pristine or dynamically new comets are entirely uncharted and make compelling targets for close-range spacecraft exploration to better understand the diversity and evolution of comets. The huge scientific achievements of Giotto and Rosetta – ESA's legacy missions to comets — are unrivaled, but now it is time to build upon their successes and visit a pristine comet, or be ready for the next ‘Oumuamua-like interstellar object. This type of innovative mission will play an important role in supplementing ESA’s Science Program as the organization plans for the next decades of scientific exploration of our Universe.