The new patented and patent pending technology uses a discovery made over a dozen years ago during the research on invisibility cloaks, themselves invented first (see US patent 8,253,639) and patented by FRACTAL. While reducing the reflected “scattering” to a radar signal, FRACTAL found a way to make the reflections disappear as well as found other unique fractal-based solutions that actually enhanced radar reflection. Such unusual reflectors are now called “superscatterers”. 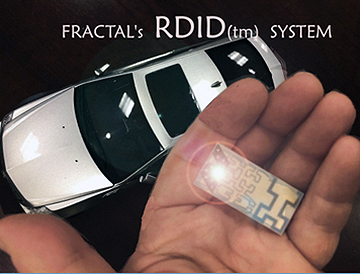 Superscatterers are the puffer fish of electromagnetics: they have a radar signature or “radar cross section” (RCS) that is bigger than they really are. This RCS increase can be dramatic, in excess of 15 dB, with the fractal solutions. Furthermore, the RCS increase can be tailored at multiple channels or bands with fractals, allowing the radar to interpret the brightened fractal superscatterers with a spectral signature, acting as an identifying “fractal license plate” on each, if desired. FRACFTAL has dubbed the new system for tracking and identification as “RDiD™”.

Fractal superscatterers solve the big problem of driverless cars as they can be tiny while bright to car radar. They can be installed in the roads, on signs, on barriers, and other vehicles. The proprietary invention also extends to including the fractal superscatterers into road reflectors (visible light), extending the utility of a safety device already employed, and making it dual use. Car-based radar can be dramatically more effective with the radar-bright fractal superscatterers. In contrast, LIDAR based systems, with their “car beanie" laser systems, no longer have an advantage over radar, and will eventually be antiquated. The expense, and detrimental appearance of car LIDAR will disappear on future driverless cars and roads.

Tantalizingly, the fractal superscatterers solve an urgent issue with satellites as well. The heavens will explode with thousands of new satellites over the next few years and most will be tiny smallsats, the size of a fist, or smaller. These spacecraft are not easily detected by ground radar, so they cannot be tracked effectively. This creates a huge problem for possible collisions and noisy ground station links.

Nathan Cohen, the technology’s inventor and FRACTAL CEO, noted that fractal superscatterers will usher in a new era of radar applications that will have profound benefits to transportation, telecommunications, and space technology. The company wants people to think about what it means to have this technology and who will use it and when. What can the company's invention make possible that could not be done before? It’s exciting to understand that billion dollar industries will be enabled by tiny, beautiful fractals.