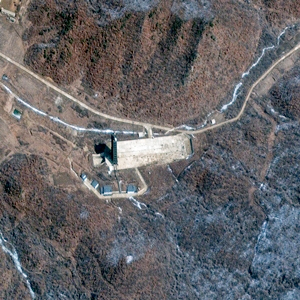 [SatNews] DigitalGlobe's online store has just posted a new image of the Tongchang missile base in North Korea.

This is a screen capture of the DigitalGlobe 50cm resolution natural color image of the North Korean launch site at Tonchang-ri. The site is located along the northwestern coast of the country and is reported to be the location of an upcoming rocket launch in April. DigitalGlobe rapidly delivers shareable, high-resolution imagery to provide up to date coverage of events on the ground. 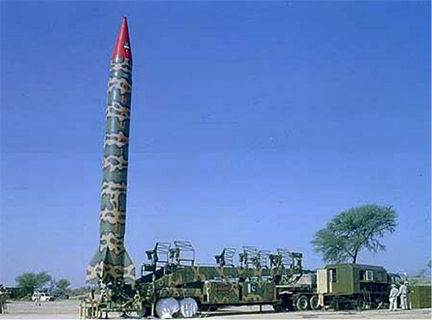 North Korea's Taipodong-2 missile, capable of packing a nuclear warhead.
Observers speculate that the North failed to fix technical glitches on the long-range missile or the Tongchang-ri base`s launch system was imperfect. Pyongyang`s latest announcement pinpointing the base as the launch site indicates the communist country`s confidence that the site has now a perfect launch system.

South Korean military authorities say the Tongchang-ri base, which North Korea began to construct in 2001, has the optimum conditions for launching long-range missiles carrying nuclear warheads. As the site is about 70 kilometers away from the Yongbyon nuclear facility and some 200 kilometers from a missile manufacturing plant near Pyongyang, it takes at most one day to transport and assemble nuclear warheads and long-range missiles. Transporting missiles on a military train from Pyongyang to the older Musudan-ri base took four to five days.

The Tongchang-ri base has a launch pad as high as a 10-story building, an engine combustion test center and a ground control center, and is about three times the size of the Musudan-ri site and far more modernized. In particular, the liquid fuel injection process, a key preparation stage, is conducted automatically in underground facilities, allowing North Korea to avoid U.S. spy satellites` surveillance. Since most of the facilities at the site are automated, multiple missiles can be launched in a short period of time.

"It`s far easier to launch a surprise missile provocation (from the Tongchang-ri base) than from the Musudan-ri base as intended by the North Korean leadership," a senior military official in Seoul said.

Launched at an adjusted angle from the Tongchang-ri base, a missile can fly toward Guam, where U.S. Pacific Command units are deployed, through territorial waters of South Korea and China without going over Japanese territory. The low possibility of the rocket vehicle or its debris falling onto Chinese or Japanese shores makes it easier for the North to make its nuclear gamble without provoking neighboring countries. The Tongchang-ri base is only about 80 kilometers away from the mouth of the Yalu River, which forms part of the North Korean-Sino border. Therefore, South Korea and the U.S. would find it tough to take military action in the event of war because an attempt at a surgical strike or air raid on the base could trigger a Chinese reaction. In addition, missiles launched from the base have a lower risk of being intercepted. Those launched form the Musudan-ri base fly at a low altitude in early stages after launch and have a high risk of being shot down by SM-3 missiles launched from a U.S. or Japanese destroyer in the East Sea. Those launched from the Tongchang-ri base go into high altitude while flying over North Korean territory, lowering the risk of being intercepted. 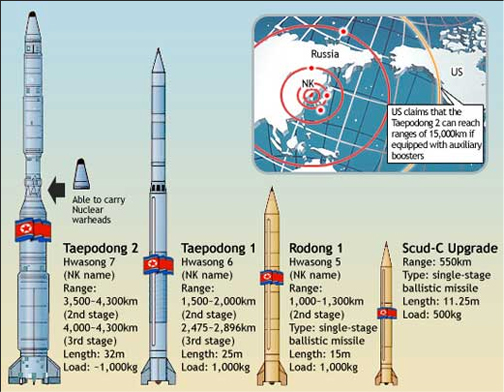