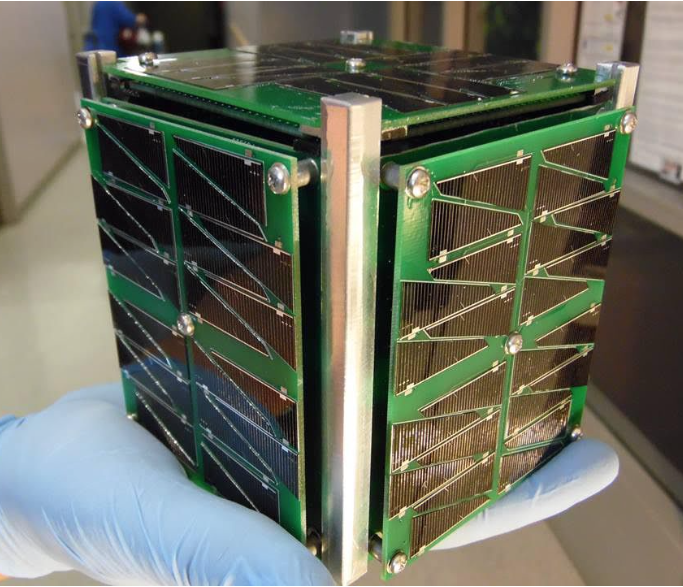 This is one of two versions of OpenOrbiter-1 a cube-shaped satellite developed by students from North Dakota State University and the University of North Dakota. Forum News Service

The adventures of CubeSats keep on coming from all different venues, including universities. Here some busy students have built the first satellite made in North Dakota which will make a trip to the ISS.

A satellite built by students from North Dakota State University and the University of North Dakota could be launched to the International Space Station sometime this summer, an NDSU professor said.

Vibration testing, fixing problems found in those tests, and lots of paperwork remain before OpenOrbiter 1, a tiny cube-shaped satellite, will become part of a payload package to be sent to the International Space Station, said computer science instructor Jeremy Straub.

“Just in the last week or two, we have been quickly responding to a lot of queries from NASA … so we can continue to move forward at the rate we need to,” he said.

Organizers hoped OpenOrbiter would be launched early this year, but given all of the testing and safety requirements, “You never say an exact date with a satellite,” Straub said.

The “cubesat,” which is 10 to 11 centimeters on each side, is designed to upload apps for science and engineering experiments, and to test a miniature 3-D printer exposed to the conditions of low Earth orbit, he said. It is the first satellite made in North Dakota, Straub said.

He said much of what will be done with the satellite in coming months is being handled by a firm called NanoRacks, which on its website bills itself as the “concierge to the stars,” saying it will take care of all necessary details “to place your payload into space.”

Straub said the hardware is set, though there might be some software updates required.

When OpenOrbiter passes all of its tests and is approved by each group that must sign off before launch, NanoRacks will put it into a tube with several other satellites, then into a padded bag to be handled by astronauts.

A spacewalk must be scheduled to install the satellite for launch from the International Space Station. It must move away from the space station before it can begin transmitting data, Straub said.

“We’re aiming to be ready to launch in the summer,” he said.

It is a “secondary payload,” so it can be bumped to a later launch date by other items or missions deemed more important.

“There are a lot of things that have to go right to hit the nail on the head with the schedule,” Straub said.

The satellite program involves dozens of students and faculty from each campus in computer engineering, computer science, electrical and mechanical engineering, and other fields, he said.

Each school built a version of the satellite. The best components of the two cubesats will make up the satellite that gets launched. The satellites also serve as back-ups for each other, with the potential of swapping out parts, Straub said.