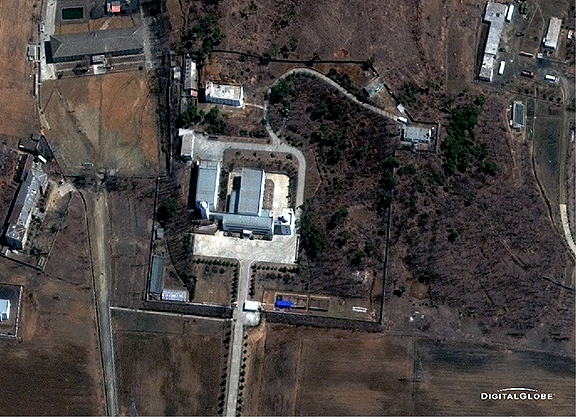 An April 5, 2012, image of the General Satellite Control and Command Center in Sanu'm-dong, Hyongjesan District, Pyongyang, North Korea. The image is courtesy of DigitalGlobe.

An interesting news story has been published at the online infosite, Sputnik International, indicating that as the White House and Pyongyang keep their lips sealed as to exactly when and where their respective leaders will meet, fears abound that North Korea will violate the spirit of the deal before it’s even sealed.

According to a U.S. government source who spoke with The Diplomat on condition of anonymity, North Korea shipped components associated with a new satellite launch vehicle to at least within the proximity of their Sanum-dong Missile Research and Development Facility around the turn of the year. According to the anonymous source, North Korean leader Kim Jong Un visited the site in late December 2017, shortly before the movement.

Jeffrey Lewis, the director of the East Asia Nonproliferation Program at the James Martin Center for Nonproliferation Studies at the Middlebury Institute of International Studies at Monterey, told The Diplomat that the the reduction of snow between December 22 and 25 on the rooftop of a building "known to be used in rocket assembly" is a tell-tale sign of activity.

The Diplomat also notes "clusters of vehicles" around the site. The outlet's US sources said that US military intelligence detected what appeared to them to be a heavy transporter for satellite launch equipment.

Cheong Seong Chang, a senior researcher at the Sejong Institute, told NK News that "Pyongyang and Washington's position on their satellite launches are radically different and thus a crisis may arise once again and one cannot say it will not end up with a war."

The Democratic People's Republic of Korea (DPRK) has been repeatedly condemned for attempted satellite launches as analysts and international leaders claim such launches are actually veiled tests of ballistic missiles. North Korea's last satellite launch, of the KwangmyÅ