A More Complete Understanding of the Saturn System, Thanks to NASA/JPL's Cassini Spacecraft

Jet Propulsion Labs (JPL) is reporting that new research is emerging from the final orbits of NASA's Cassini spacecraft, which represents a huge leap forward in the understanding of the Saturn system — especially the mysterious, never-before-explored region between the planet and its rings — some preconceived ideas are turning out to be incorrect, while new questions are being raised. 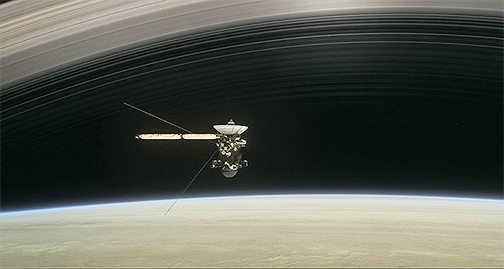 Artistic rendition of the Cassini spacecraft on orbit around Saturn.

Image is courtesy of JPL.

Six teams of researchers are publishing their work October 5 in the journal Science, based on findings from Cassini's Grand Finale. That's when, as the spacecraft was running out of fuel, the mission team steered Cassini spectacularly close to Saturn in 22 orbits before deliberately vaporizing it in a final plunge into the atmosphere in September of 2017.

Knowing Cassini's days were numbered, the mission team went for gold. The spacecraft flew where it was never designed to fly. For the first time, it probed Saturn's magnetized environment, flew through icy, rocky ring particles and sniffed the atmosphere in the 1,200-mile-wide (2,000-kilometer-wide) gap between the rings and the cloud tops. Not only did the flight path push the spacecraft to its limits, the new findings illustrate how powerful and agile the instruments were.

Many more Grand Finale science results are to come, but here are some of the highlights:

For the Cassini mission, the science rolling out from Grand Finale orbits more than justifies the calculated risk of diving into the gap — skimming the upper atmosphere and skirting the edge of the inner rings, said Cassini Project Scientist Linda Spilker, adding that lmost everything going on in that region turned out to be a surprise," Spilker said. "That was the importance of going there, to explore a place we'd never been before. And the expedition really paid off — the data is tremendously exciting. Many mysteries remain, as we put together pieces of the puzzle," Spilker said. "Results from Cassini's final orbits turned out to be more interesting than we could have imagined."

The papers published in Science include...