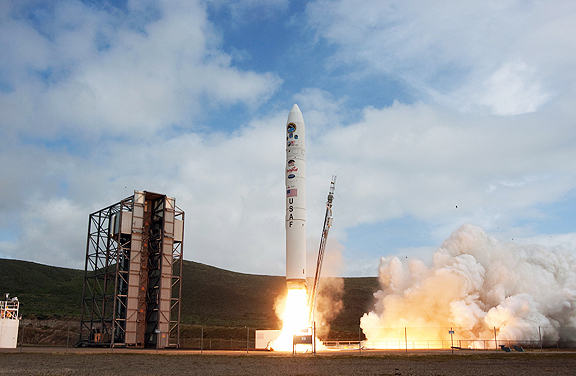 The mission originated from Vandenberg Air Force Base, California, when the rocket lifted off from Space Launch Complex-8 at approximately 4:00 p.m. (PST) on Thursday, 22 April. The Minotaur IV flew a suborbital trajectory downrange over the Pacific and delivered the HTV-2 glide vehicle to the desired separation conditions. The Minotaur IV launch vehicle is based on decommissioned Peacekeeper rocket motors that Orbital integrates and upgrades with modern avionics and other subsystems to produce a cost-effective booster based on flight-proven hardware. For the HTV-2 mission, Orbital flew the three-stage Minotaur IV "Lite" version of the rocket to carry out the suborbital flight trajectory. The first orbital mission of the four-stage Minotaur IV configuration will take place this summer when it launches the Air Force's Space Base Space Surveillance (SBSS) satellite.