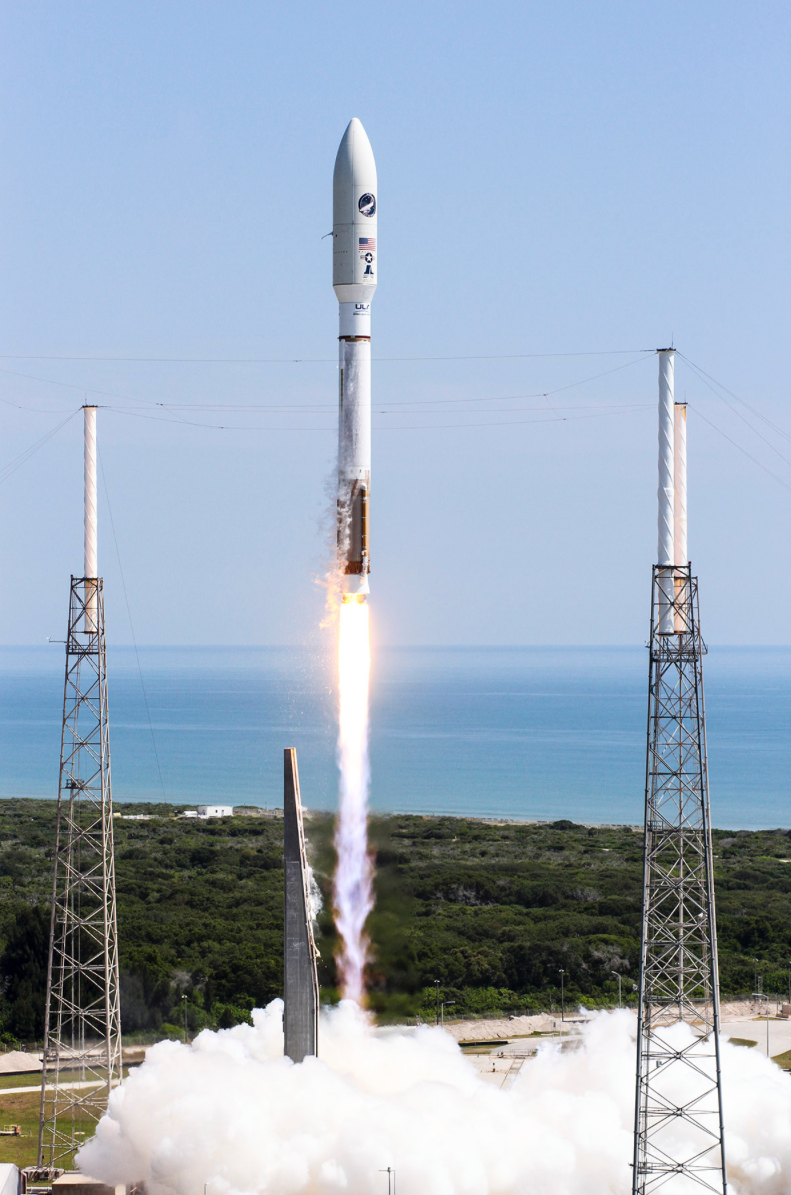 Cape Canaveral Air Force Station, Florida. (May 20, 2015) A United Launch Alliance (ULA) Atlas V rocket successfully launched the AFSPC-5 satellite for the U.S. Air Force at 11:05 a.m. EDT today from Space Launch Complex-41. This is ULA’s fifth launch in 2015 and the 96th successful launch since the company was formed in December 2006.

[SatNews] Just in from ULA a second update in less than 50 minutes... regarding CubeSats.

“ULA is honored to launch this unique spacecraft for the U.S Air Force. Congratulations to the Air Force and all of our mission partners on today’ssuccessful launch! The seamless integration between the Air Force, Boeing, and the entire mission team culminated in today’s successful launch of the AFSPC-5 mission” said Jim Sponnick, ULA vice president, Atlas and Delta Programs.

This mission was launched aboard an Atlas V 501 configuration Evolved Expendable Launch Vehicle (EELV) , which includes a 5.4-meter-diameter payload fairing. The Atlas booster for this mission was powered by the RD AMROSS RD-180 engine, and the Centaur upper stage was powered by the Aerojet Rocketdyne RL10C-1 engine. This was ULA’s sixth launch of the 501 configuration, and ULA’s 54th mission to launch on an Atlas V rocket.

ULA's next launch is the Atlas V GPS IIF-10 mission for the U. S. Air Force, scheduled for July 15 from Space Launch Complex-41 from Cape Canaveral Air Force Station, Florida.

The EELV program was established by the United States Air Force to provide assured access to space for Department of Defense and other government payloads. The commercially developed EELV program supports the full range of government mission requirements, while delivering on schedule and providing significant cost savings over the heritage launch systems.

With more than a century of combined heritage, United Launch Alliance is the nation’s most experienced and reliable launch service provider. ULA has successfully delivered more than 90 satellites to orbit that provide critical capabilities for troops in the field, aid meteorologists in tracking severe weather, enable personal device-based GPS navigation and unlock the mysteries of our solar system.

ATLAS V AFSPC-5 MISSIONThe X-37B Orbital Test Vehicle, or OTV, is an experimental test program to demonstrate technologies for a reliable, reusable, unmanned space test platform for the U.S. Air Force. The primary objectives of the X-37B are twofold: reusable spacecraft technologies for America’s future in space and operating experiments which can be returned to, and examined, on Earth.

The X-37B Orbital Test Vehicle is the newest and most advanced re-entry spacecraft. Based on NASA’s X-37 design, the unmanned OTV is designed for vertical launch to low Earth orbit altitudes where it can perform long duration space technology experimentation and testing. Upon command from the ground, the OTV autonomously re-enters the atmosphere, descends and lands horizontally on a runway. The X-37B is the first vehicle since NASA’s shuttle orbiter with the ability to return experiments to Earth for further inspection and analysis, however the X-37B can stay in space for much longer.

The Atlas V vehicle will also launch an Aft Bulkhead Carrier (ABC) containing eight P-Pods will release 10 CubeSats. Following primary spacecraft separation the Centaur will changealtitude and inclination in order to release the CubeSat spacecraft which are sponsored by the

(NASA). The ten CubeSats were developed by the U.S. Naval Academy, the Aerospace