SSL, a business unit of Maxar Technologies (formerly MacDonald, Dettwiler and Associates Ltd.) (NYSE: MAXR; TSX: MAXR), has partnered with a team at NASA’s Jet Propulsion Laboratory (JPL) and the University of Michigan (UM) selected by the agency to conduct a Phase A mission study under NASA’s Explorers Program.

SSL’s role in the mission, called the Sun Radio Interferometer Space Experiment (SunRISE), is to provide a ride beyond geosynchronous orbit (GEO) for a constellation of science-gathering smallsats. SSL will use its Payload Orbital Delivery System (PODS) technology to dispense the small satellites on-orbit as free-flyers.

Mission Principal Investigator Justin Kasper, Associate Professor in the University of Michigan’s Climate and Space Sciences and Engineering Department, will lead the SunRISE team that will use the small satellite constellation, operating as a synthetic aperture radio telescope, to address the critical heliophysics problems of how solar energetic particles are accelerated and released into interplanetary space.  Heliophysics is the study of how the Sun affects the environment of the Solar System. 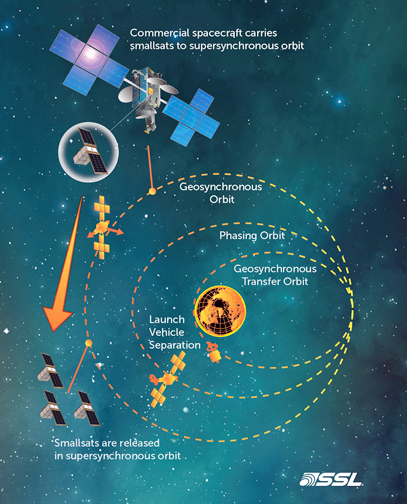 By sharing a ride to space on an SSL-built satellite with PODS, the SunRISE mission benefits from the frequency of commercial launch schedules and a significantly reduced launch cost compared to a dedicated mission. SSL developed PODS in conjunction with the Defense Advanced Research Projects Agency, with the expectation that it will play a key role in enabling cost-effective, high tempo access to space for small payloads on a wide variety of important commercial, government, and scientific missions beyond LEO.

NASA is also leveraging SSL’s commercial capabilities and experience to help reduce cost on a variety of next-generation missions that enable groundbreaking robotics and automation technologies. These include a NASA Discovery Mission to explore the asteroid Psyche, the Restore-L mission to service satellites in LEO, and the Dragonfly program, which will demonstrate robotic satellite assembly on-orbit.

Justin Kasper, mission principal investigator and associate professor, University of Michigan, said that using the PODS system for the launch gives the team the ability to deploy a constellation of smallsats beyond GEO orbit for a fraction of the cost of a dedicated launch, enabling mission implementations that would not have been possible just years ago.

Richard White, the President of SSL Government Systems, added that the Payload Orbital Delivery System was developed as an innovative solution for smallsats that need to reach GEO and beyond. The PODS system helps to provide flight opportunities for cost-capped missions that wouldn’t otherwise be feasible.