...RapidEye data, has come to a close and the results are now available on the project’s website. MALAREO, which began just over two years ago, was funded by the European Commission under FP7 and run by a mixed European-African comailnsortium, which incorporated years of experience in malaria control, with the Global Monitoring for Environment and Security (GMES) Earth Observation expertise.

Remote Sensing Solutions GmbH (RSS) near Munich was responsible for data processing and the development of EO products for the project, which explored the spatial variability of malaria-relevant environmental factors at local level and supported the work of the National Malaria Control Programs in South Africa, Swaziland and Mozambique. The MALAREO study area, about 43,000 square kilometers, was imaged by the RapidEye satellite constellation, and data was provided via the EC/ESA GMES Space Component Data Access (GSC-DA). 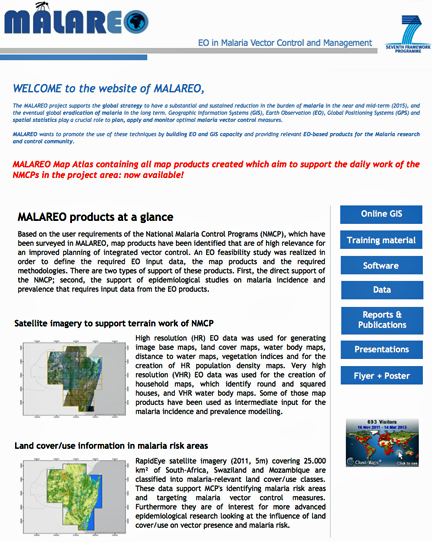 After completion of the project in January, a final meeting with end-users from the Southern African National Malaria Control programs and the MALAREO project team took place in Durban, South Africa, where the products derived from the RapidEye imagery were presented. The end-users emphasized the benefit of these products and the resulting Map Atlas for malaria control, as it greatly improves planning of malaria control measures. It also complements the approach of linking environmental and epidemiological data, which is a first step towards an early warning system for malaria. The MALAREO Map Atlas, summarizing the EO-based mapping approaches and additional information about the project can be found at the project website: www.malareo.eu.