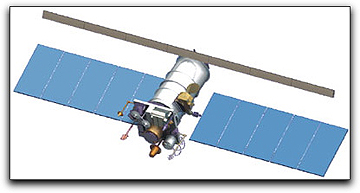 Russia will launch a new meteorological satellite on Tuesday, starting the process of restoring the country’s weather forecasting capabilities, the Federal Space Agency Roscosmos said on Monday. At present, Russia does not have any weather satellites in orbit and uses meteorological data from U.S. and European weather agencies. The new-generation Meteor-M weather satellite and five smaller satellites will be launched on board a Soyuz 2.1b carrier rocket from the Baikonur space center in Kazakhstan. Meteor-M weighs about 2,700 kilograms (6,000 lbs) and has a service life of five years and will have an orbit at an altitude of 830 kilometers (515 miles). The satellite is designed to gather data for weather forecasts, to monitor the Earth’s ozone layer and radiation conditions in the upper atmosphere, and to provide information on ice floe for maritime shipping in the polar regions. The satellite is the first to carry a “Severyanin-M” radar, which operates in the centimeter wave band to provide all-weather and round-the-clock data independent of natural illumination. Russia plans to place a second Meteor-M satellite into orbit in the near future to ensure independent collection of meteorological data.