Revenues from global commercial space activity in 2018 climbed to their highest level ever and now make up nearly 80 percent of the total global space industry, according to new findings from The Space Report Quarter Three.

The Space Foundation has just published the third quarter 2019 issue of The Space Report and shared other key findings: 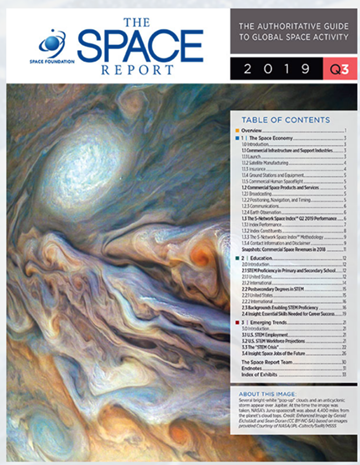 The recent success of commercial space activity can be traced back more than 13 years, when U.S. government leaders and business entrepreneurs realized that vast opportunities — in economic development, technological advancement, and scientific knowledge — awaited in space.

The Space Report is widely recognized as the definitive body of information about the global space industry. It contains worldwide space facts and figures and is illustrated with photographs, charts, and graphs detailing the benefits of space exploration and utilization. The report is a resource for government and business leaders, educators, financial analysts, students, and space-related companies.

Its analysis also extends to the education and workforce issues that will shape current and future endeavors in space. For the third-quarter issue, The Space Report also examined global and national test results for science, technology, engineering, and mathematics (STEM) subjects. Among the findings:

The Space Foundation’s Research & Analysis team produces The Space Report and earlier this year transitioned from an annual summary to quarterly updates of global space activity.