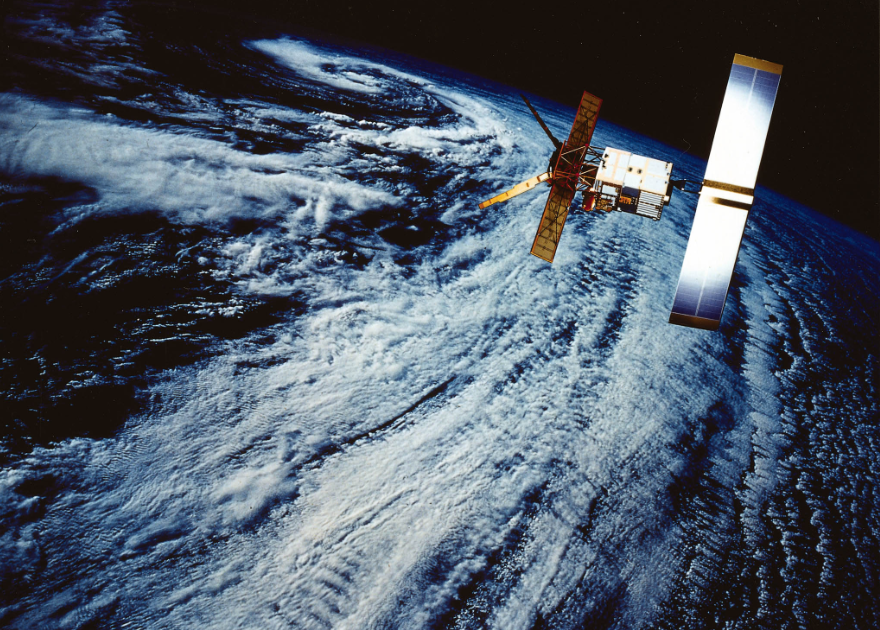 ERS-1 Earth observation satellite of the European Space Agency thunders into the night sky in the early hours of its maiden launch.

Reliving the event on Wednesday, July 17, 1991—hundreds of aerospace experts, scientists, representatives from industry and journalists watch the countdown for Ariane flight number 44 from the spaceport near Kourou (French Guiana) on the large screen of the European satellite control center in Darmstadt. It isn't difficult to imagine the excitement and tension—fingers-crossed—for a successful launch and mission for the European Space Agency.

This was to be the first of all modern European Earth observation satellites. The ERS-1 mission marked not only the advent of modern Earth observation by ESA but also the beginning of a success story of remote observation by Space Systems of Airbus Defence and Space.  At the heart of the ERS-1, which operated in a polar orbit 785 kilometers above the Earth, was a radar with a 5.7-centimeter wavelength (corresponding to a frequency of 5.3 GHz in the C-band). Every time the satellite orbited the Earth, its beam scanned a 4,000-kilometer long and 100-kilometer-wide strip of the Earth’s surface, thus enabling images with a resolution of 30 meters to be generated.

This was definitely a group effort, ERS-1 was developed and built by an industrial consortium of more than 50 companies in 14 countries led by what is today Airbus Defence and Space and it weighed in around 2.4 tonnes. Twenty-five years ago, this was the most modern and complex satellite of its time and was the first European satellite to be equipped with a radar system and microwave instrumentation for taking measurements and acquiring images over land and sea. This made it possible for the first time to observe regions of the Earth that had often remained hidden under clouds or fog.

The life span was projected to be three years, but ERS-1 proved to be more vital than expected continuing on for nine years. By the time it had reached the end of its service in 2000, it had orbited the planet 45,000 times and transmitted 1.5 million images to Earth. The satellite was finally taken out of service in March 2001, and duly noted to be the pioneer of environmental research from space.

Its areas of application were just as diverse as its user communities demonstrated by three equally diverse headlines from the 1990s:

ERS-1 in 1991 for the first time could also measure the direction and speed of the wind over the oceans providing meteorological organizations across the world this data for forecasts.

The next generation, ERS-2 lifted off four years later (April 1995), many more uses were discovered.

First, this satellite was also equipped with GOME (Global Ozone Monitoring Experiment), which monitored the ozone content of the stratosphere and, in particular, the changes to the ozone hole over the South Pole.

Second, both radar satellites were operated in parallel for a few years. During this tandem mission of ERS-1 and 2, the new radar technique of interferometry was tested. Two or more images of the same area taken by the two satellites at different times are used for this. Superimposing the images gives what is known as an interferogram. It can be used to generate digital terrain models with elevation at a resolution of a few meters. Moreover, it is possible to register changes that have occurred between images taken of the surface with millimetre accuracy.

Based on the ERS experience, a series of national satellite programs and further European projects were initiated. Under the leadership of Airbus Defence and Space, the environmental satellite Envisat (2002-2012) and Europe’s first polar orbiting meteorological satellite MetOp (since 2006) were developed.

From 2021, the second-generation MetOp satellites (MetOp-SG) will take over observation. Satellites with a predominately scientific mission are called Earth Explorers. Airbus Defence and Space is responsible for the ice research satellite CryoSat (launched in 2010) and the three-satellite Swarm mission (launched in 2013) that studies the magnetic field of the Earth. Aeolus, EarthCARE and Biomass are three further Earth Explorers being developed for ESA. Airbus Defence and Space has primed more than 40 Earth observation programmeswhich have together clocked up more than 300 successful years in orbit.

Sentinel-1A, launched in April 2014, was the first satellite for the European Copernicus Programme (EC/ESA) for environment and security. Copernicus was developed to deliver important information in six key areas:

The comprehensive and uniform data necessary for environmental monitoring on a global scale is inconceivable without satellite systems. Copernicus satellite-supported Earth observation is of outstanding importance due to the creation of independent access to global Earth observation data.

The Sentinels, developed especially for Copernicus are at the core of the space component. Airbus Defence and Space is leading the industrial management of five of the seven Sentinel satellite missions. The Copernicus satellites Sentinel-5P and Sentinel-2B are undergoing final testing and preparation for their launch.

With more than 50 years of experience in Space, Airbus Defence and Space has greatly contributed in the design, manufacture, test and operation of satellites, instruments and components, and the associated services.