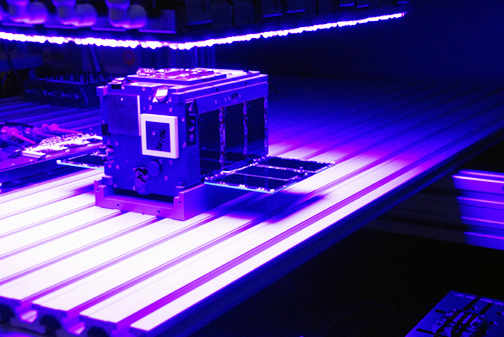 One of the AeroCube-10 cubesats undergoes testing in Aerospace's solar simulator laboratory in El Segundo, Calif. Photo is courtesy of the company.

Most debris models estimate that nearly 1 million debris objects greater than 1 centimeter are in low Earth orbit, of which approximately 30 percent are identified as “lethal debris,” which can damage satellite sensors, erode solar arrays, or possibly puncture a space suit. Improving the space community’s ability to predict a satellite’s mechanical and orbital lifetime, and timing of debris reentry will help maintain a sustainable space environment.

One experiment consists of a dispenser with a set of 28 individually releasable atmospheric probes. These lightweight circular probes, similar in size to CDs, spring open into spherical objects. Due to the probes’ large surface areas being exposed to the atmosphere, they lose altitude quickly and burn up in a matter of weeks. The changes in velocity and altitude due to drag while reentering will be used to measure atmospheric density. 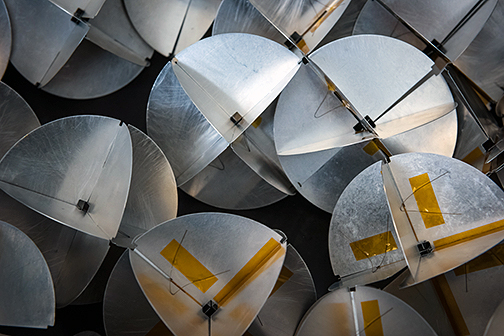 Falling Star payload is an experiment to study the time-varying density of the atmosphere. Photo is courtesy of Jeff Berting, The Aerospace Corp.

Each pair of AeroCube-10 1.5-unit cubesats measures 10 x 10 x 15 centimeters, and each unit in the pair has virtually identical shapes and mass (within 2 grams), which prevents the units from drifting apart. This proximity allows them to demonstrate satellite-to-satellite pointing and communication and test a steam propulsion thruster aboard AeroCube-10.

Catherine Venturini, a senior project leader in Aerospace’s Science and Technology Strategy and Development department, said that today's sophisticated computer models are limited in predicting how the atmosphere will behave in the near or long term and do not provide exact timing of debris reentry. The company is using inexpensive cubesats equipped with dosimeters and other unique sensors to conduct experiments that will give The Aerospace Corporation enhanced space situational awareness (SSA).